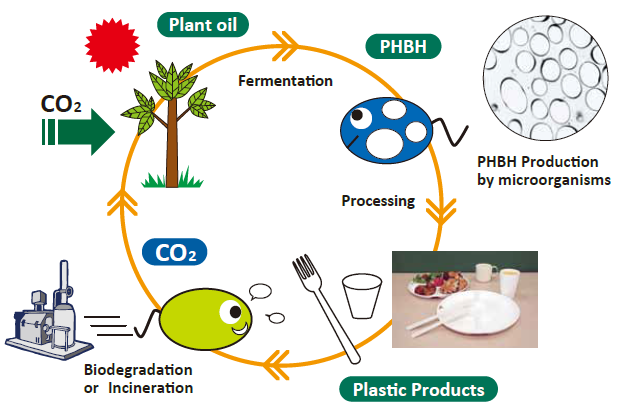 HＰBH™ is a novel biopolymer produced with sustainable raw materials. It is 100% bio-based and with excellent biodegradability.
It is produced through Kaneka’s unique microbial fermentation process and could be used in a variety of applications for biodegradable and durable goods. Our resent research shows that PHBH™ also has excellent biodegradable property in marine environment, which contributes to the reduction of marine plastic waste.

PHBH™ is a polyester similar to polyethylene (PE) and polypropylene (PP) and has excellent biodegradable property in various different conditions. For examples, it is compostable at ambient temperature (Home compost), and also biodegradable in soil and sea water. As an alternative resin to PE or PP, PHBH™ can be used in a variety of applications. The most suitable applications are difficult to recollect and sort after use, such as agricultural mulch-film, food packaging, bin liner, fishnet, etc. Moreover, PHBH™ could contribute to solving the issue of plastic waste in developing countries since PHBH™ decomposes into carbon dioxide and water over time when exposed to microorganisms.

PHBH™ is produced by microbial fermentation with plant oils as its carbon sources. PHBH™ can be processed into various plastic products by commonly used equipment. After use, PHBH™ biodegrades in the presence of microorganism into carbon dioxide and water. In other words, PHBH™ creates a carbon neutral system. Moreover, its biodegradability in sea water provides a great solution to the problem of marine microplastic pollution, which has become a major global issue.

Biodegradability
PHBH™ has excellent biodegradability under aerobic, anaerobic, aquatic and composting conditions and is proven to be an environment-friendly plastic. 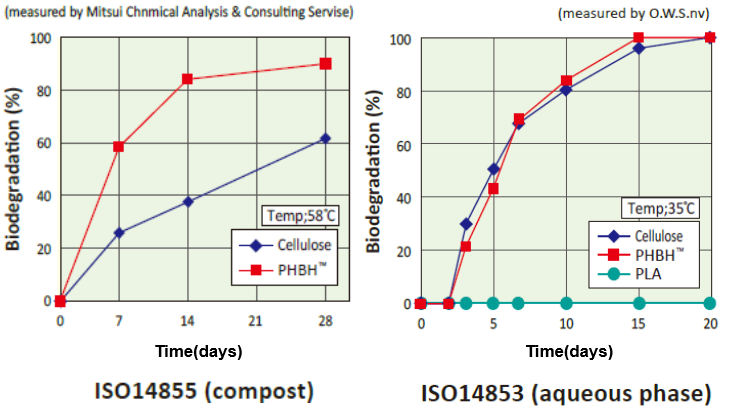 As illustrated in the above graphs, PHBH™(shown as red) shows the same or higher level of biodegradability than cellulose (blue), which is a standard control according to ISO standards. PHBH™ can transform via biodegradation to reusable resources such as compost and methane gas.

Mechanical Properties
With two grades, 151C as flexible type and X131A as rigid type, PHBH™ can be usable for a variety of applications. PHBH™ has better gas and moisture barrier properties compared to other biodegradable polymers such as PLA, PBS and PBAT. 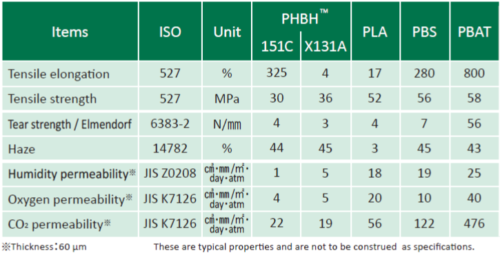 Technical Maturity / Past Record of Introduction

PHBH™ has been launched to the market since 2008 and is used mainly in France and Germany for fruit & vegetable bags and compostable bags. Yearly sales of of PHBH™ in 2018 has achieved 1150 tons.
In developing countries, we have successfully incorporated PHBH™-based compounds in the production of bin liners in commonly used blown film machine of a Kenyan film manufacturer. In Kenya, we have been supporting the National Environmental Management Authority and the Kenya Bureau of Standard for the introduction of certification and labelling system related to biodegradability. By collaborating with local organizations and conducting technical training to local processing manufacturers, we help to promote understanding and adoption of biodegradable polymer-based bags.

Information of Patent Related to This Technology

Dicrect Investment
We focus on the development of core technologies in Japan, while setting up a production plant in local market based on market demands(investment through equity capital)

Partnership
We work closely with our partners through technical service and product development.