N ippon Basic Co., Ltd’s Desaliclean 2501/9000 is a piece of advanced equipment designed to create drinking water from seawater. This ultimate solution to the global water shortage can bring many tons of water to isolated areas, villages or disaster areas that need clean water fast.

Today, nearly two million children die around the world due to unclean water, according to UNICEF. That’s why there’s such a need for purified water, particularly when a third of the world’s population does not have access to clean water. The Desaliclean 2501/9000 by Nippon Basic Co., Ltd. will change that. Nearly 75 percent of the globe’s surface area is covered by salt water, and Desaliclean would help convert that water into fresh water that can be used for those who need it most.

Nippon Basic is leading a growing trend that utilizes simple technologies to turn dirty water into clean water for developing countries, particularly where waterborne diseases are present. This occurs often in areas hit by sudden disaster, as well as in villages where famine is widespread. Clean water can halt the spread of disease and bring much-needed relief to remote areas. 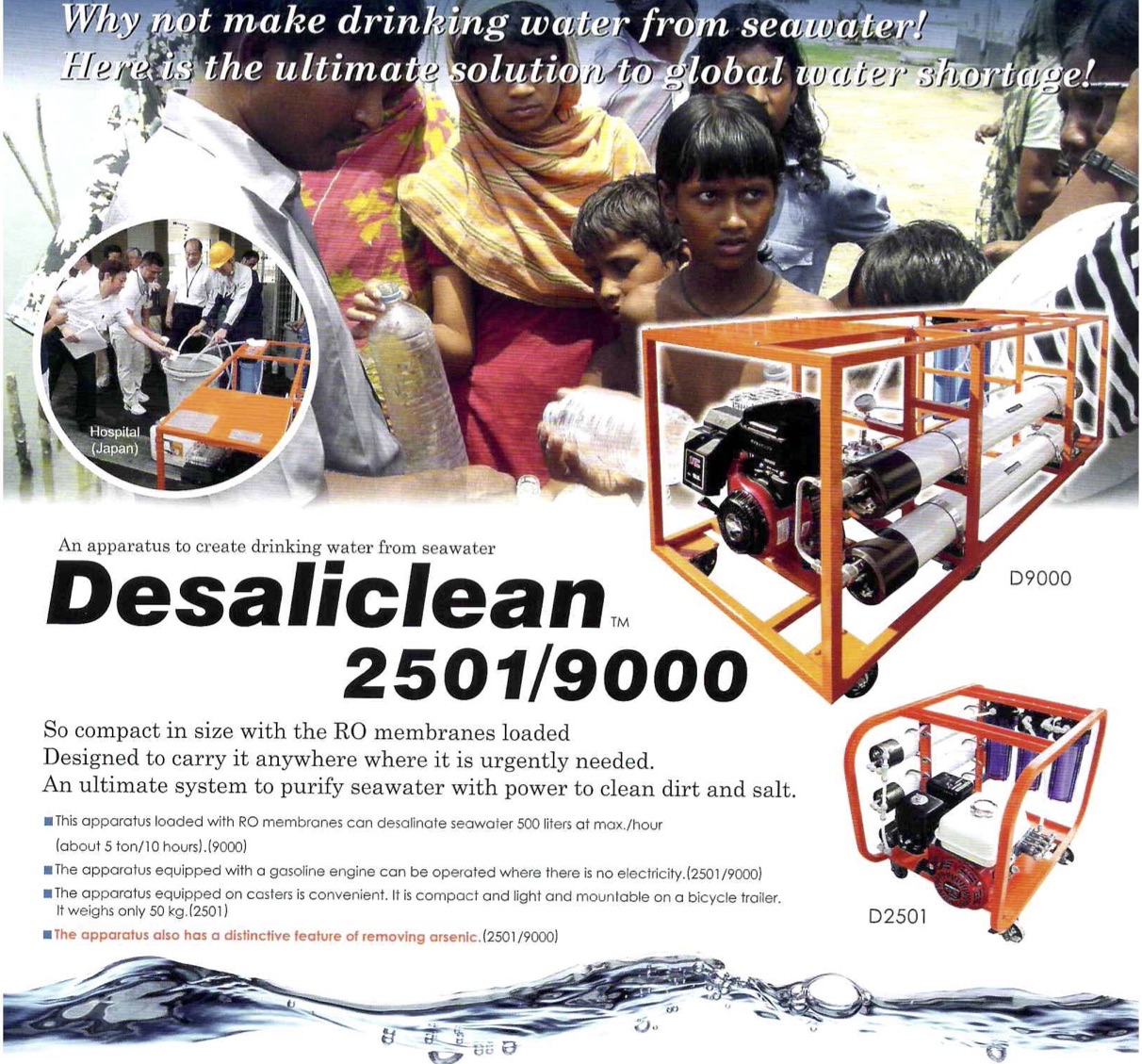 Operated by a gasoline engine or electrical motor-driven engine, Desaliclean9000 is able to produce 500 liters of clean drinking water per hour from sea water, and with a dry weight of 120 kg, it’s extremely mobile. Just two people are needed to carry this equipment from place to place, or roll it on caster wheels.

The list price on the standard size Desaliclean 9000 is JPY 5.6 million. However, a smaller model called the Desaliclean2501 is JPY 2.2 million, making this an affordable choice for municipalities and private companies.

Because Desaliclean is often utilized in disaster areas, it’s easy and quick to operate during times of stress, such as earthquakes and tsunamis. Two options are available: gasoline engine or electrical motor-driven engine.

RO filters are expensive. That’s why it’s important to have a piece of equipment that does not require changing often. One of the advantages to the Desaliclean is longevity of RO filters, which is extended by the chemical cleaning apparatus that can be purchased separately. The company sells the chemical cleaning equipment at an additional expense.

Desaliclean has been introduced in Japan and Bangladesh for the past year, while it is still underway in Nigeria. Nippon Basic currently sells products both in Japan and overseas markets where many people don’t have access to clean water.

An equipment to create drinking water from seawater.

Desaliclean9000 can produce 500 liters of clean drinking water per hour from sea-water or brackish water by use of a gasoline engine. An electrical motor-driven Desaliclean is also available. Its dry weight is only 120 kg. It measures W 550 x D 1,500 x H 780 mm. It can be carried by 2 persons, or can be moved by rolling on its casters. The list price of the model Desaliclean9000 in Japan is JPY 5.6 million. A smaller model, the Desaliclean2501 is JPY 2.2 million.

Past record of introduction of Desaliclean: 10 year
Japan, Bangladesh, Indonesia

Export of product
Selling products both in Japan and overseas countries. 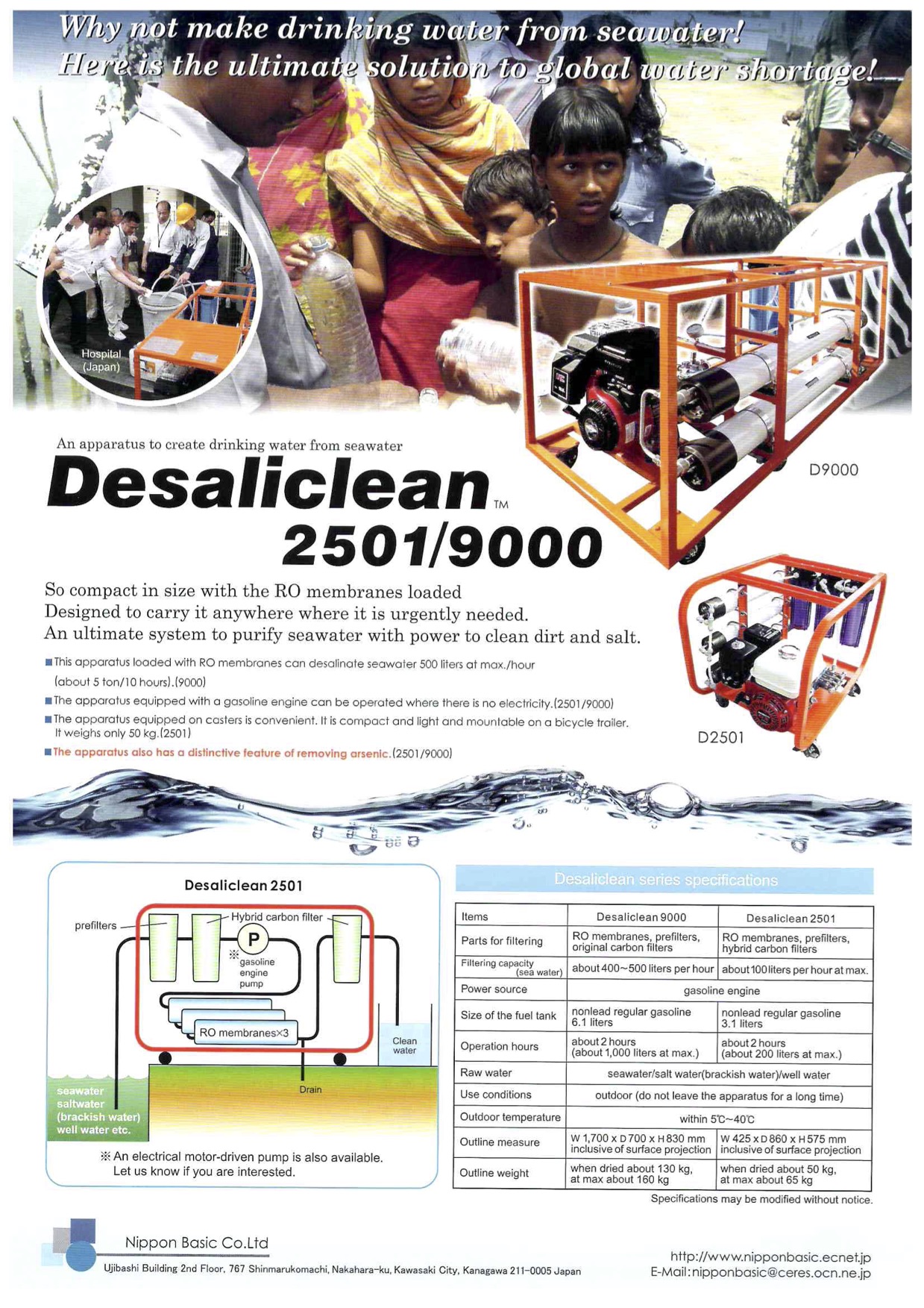 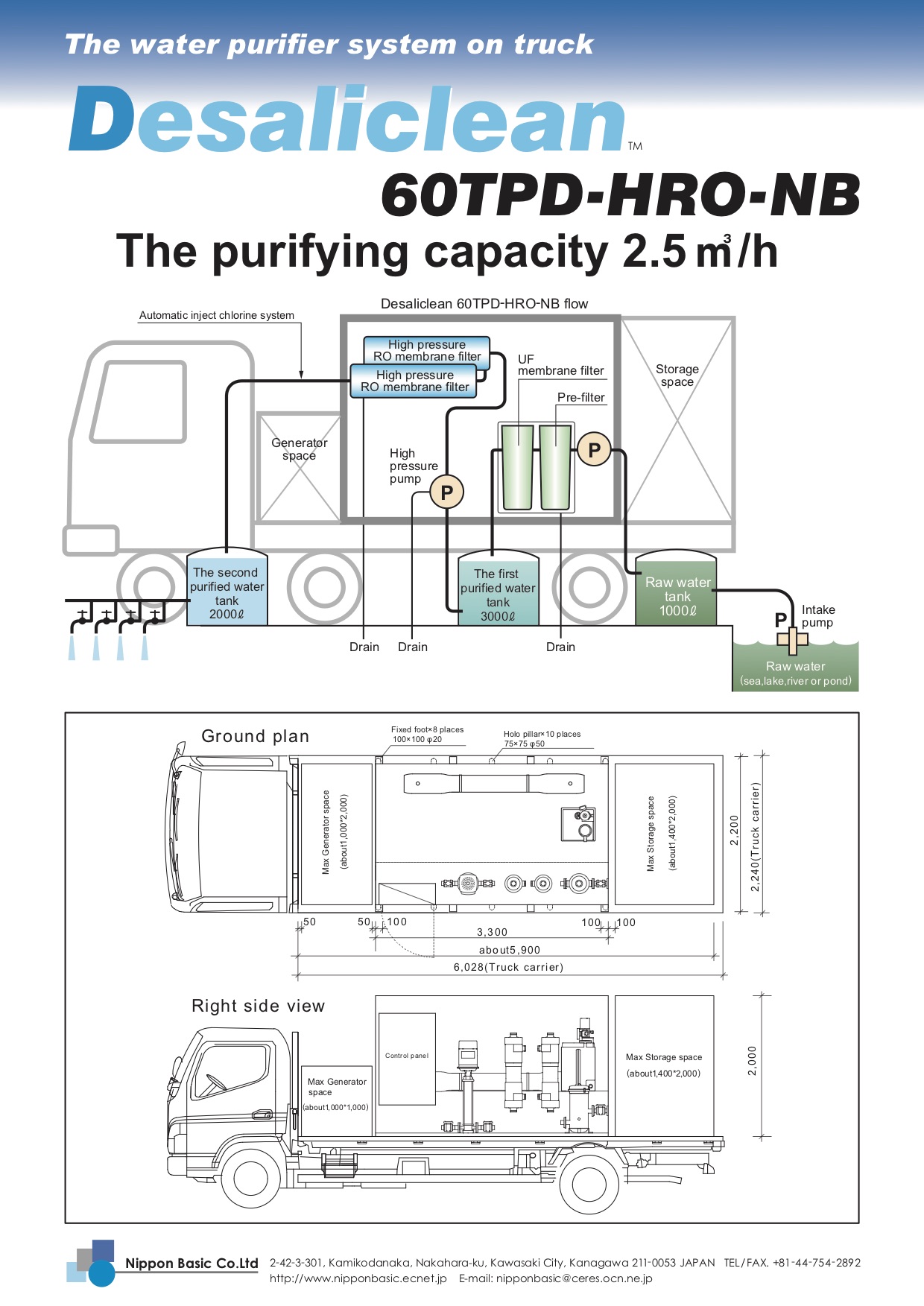