UNIDO Statistics presents this report on the observed growth of world manufacturing production in the third quarter of 2016. The quarterly growth estimates are based on the indices of industrial production. Reports on earlier quarters are available on UNIDO’s website. Interested users can access methodological documents on the estimation procedure of annual growth rates and a compilation of quarterly indices on the statistical web pages of UNIDO’s website. 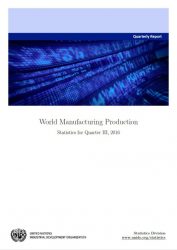