One step into the venue, one is swirled into a vast pool of energy.
Nearly 300 participants of the African Business Education Initiative for Youth, or ABE Initiative, close to 100 Japanese companies and representatives from 21 Embassies in Japan gathered for the African Business Networking Fair 2017 at the Ota City Industrial Plaza (PiO). 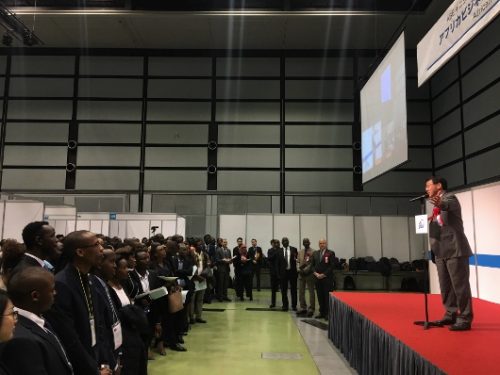 “For those participating in this initiative; you are the future of Africa and Japan”, says Mr. Ichiro Aizawa, Head of the Japan-Africa Parliamentary Representatives’ Association, in his welcome remarks. Representing the same association, Mr. Asahiko Mihara spoke passionately on his hopes that the participants “develop their own countries through their wisdom and the technical knowledge they gain in Japan”.

The ABE Initiative is a programme initiated by the Government of Japan in an effort to cultivate human resources who will play the role of future leaders in guiding Japanese businesses into the African market. 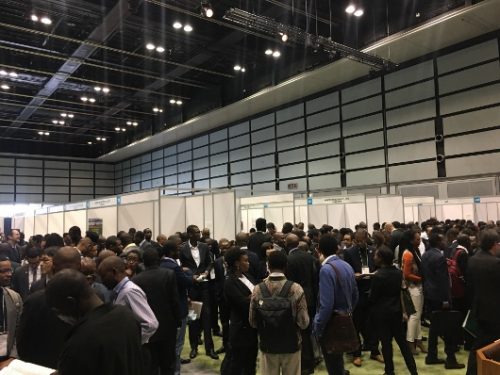 Mr. Seiji Okada, Deputy Director General, Middle Eastern and African Affairs Bureau of the Ministry of Foreign Affairs (MOFA) mentioned the Japanese government’s acknowledgement of the importance of initiatives by the private sector in working with African countries, and added that during the Tokyo International Conference on African Development VI, or TICAD VI, the government stated its commitment in supporting the human resource development of 1,500 young persons from African nations within a period of 3 years.

The Minister Counsellor of the Algerian Embassy in Japan, Mr. Mohammed Soumani then commented that the occasion is a true initiative of hope, with a reminder that science and technology is also of importance for the economic development agenda.

Mr. Hideo Eguchi of JICA introduced the fact that over 100 companies have accommodated internships so far and that half of the students who have arrived in 2014 on the first batch have already returned to their home countries with much to contribute from what they have learned in Japan. Mr. Eguchi closed his remarks by noting that he wishes to make the Fair “open and innovative”.

<Comments from individual and company participants> 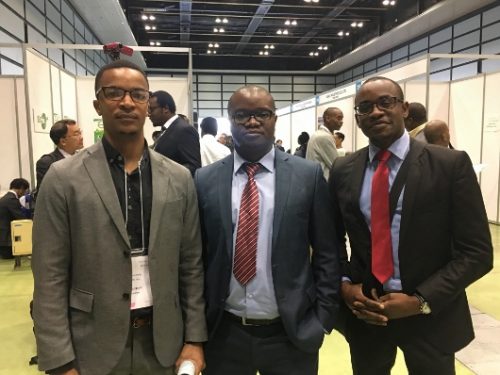 ”Japan has wonderful technologies”, says Mr. Tebogo Pooe from South Africa and Mr. Paul Habasimbi from Zambia; both of whom are currently studying at Ashikaga Institute of Technology. They are both glowing and smiling as they speak about their experiences in Japanese. “We want to bring back Japanese technologies ourselves in the way that would fit the needs of our countries”, say both gentlemen with commitment. In response to how there must be little time left for entertainment in Japan, they respond again in Japanese: “Oh no, that is different. Experiencing entertainment is just as important!”. Both men left the scene with a deep bow, appropriately following the Japanese custom and with big smiles.

Ms. Hellen Nyambura Ndere from Kenya does not hide her feeling: “It is cold in Yamagata” and adds a smile. When asked about the TICAD VI held in her home country, Ms. Ndere replies with radiance in her eyes: “It certainly had an impact on me and my country”. In a country in which manual labor is still the mainstream in agriculture, Ms. Ndere wishes to bring her knowledge in agriculture gained in Japan back to her own country.

Mr. Nzelengenge Tambiki Junior from the Democratic Republic of Congo specializes in traffic noise at Kumamoto University. As the only civil engineer from his country to focus on the problems of traffic noise and vibration that comes with it, Mr. Tambiki is committed in finding countermeasures. His eagerness to tackle the issues faced by both DRC and Japan seems firm. 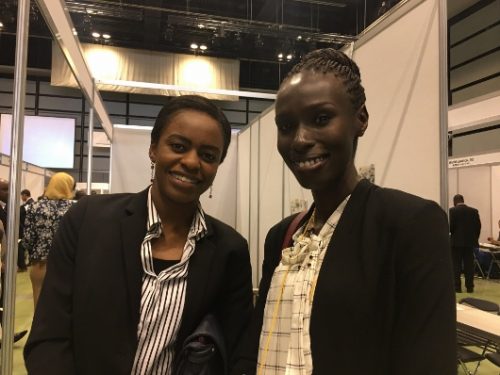 Ms. Mary Kemuma Matogo of Kenya studying at the International University in Japan in Niigata and Ms. Awar Arop Beng Kuol from South Sudan studying at Shibaura Institute of Technology in Tokyo portray the fruitful time they are spending in Japan. Ms. Matogo sets her future rather openly within her expertise on international relations, while Ms. Kuol, whose expertise is in architecture, is committed in returning to her country to contribute with the experiences she will gain by the time her internship in Japan is completed..

Almost all 100 company and institutional booths present were filled with students, often with long queues.
“The response from the students is much more than we had expected”, says Mr. Masato Akimoto of Chugai Yukagaku Kogyo. “We work with lubricating oil for vehicles, which is rather a niche market. Yet, we seem to attract students as cars are something they always see in their own countries. This is also an opportunity for us to look into the possibility of developing our business in African countries”. 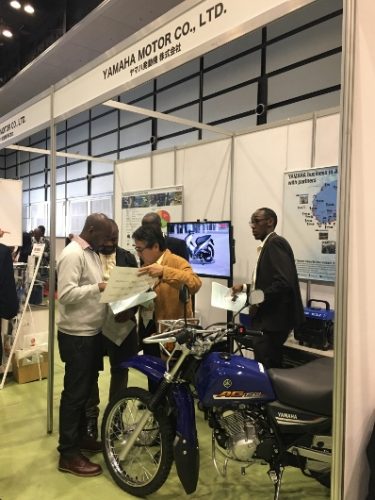 For many companies, the fair is a marketing opportunity. “We are here to collect comments from the people from Africa for marketing purposes. Should the students express interest in doing an internship with us, we connect them to our human resource department”, says Ms. Miyuki Nagai of Fujitsu. Mr. Toshitaka Aichi from YAMAHA Motor also interacts actively with the students visiting the booth. Mr. Aichi introduces the project he has led, which combined the design expertise of the interns at the office and the live comments from the students from the ABE Initiative whom he met at the African Business Networking Fair 2016. Together, they developed a motor vehicle design most fit for the needs of the African market. 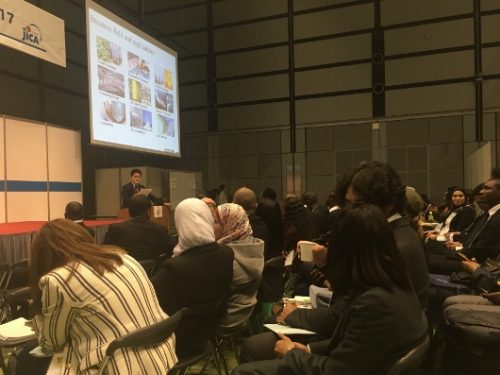 Mr. Narahara and Mr. Kamiya from Mayekawa have experiences accommodating students from Tanzania and Kenya as interns from the ABE Initiative. “The outcome of the programme will not be apparent instantly. After having experienced the programme in the last couple of years, the value of our experiences with the interns will be clearer from now on”, says Mr. Narahara. Mr. Kamiya adds that “the Initiative is much appreciated as we do not have to go to Africa ourselves to search for the interns and the network that comes with them. The initiative also plays a role in opening up the minds of our staff towards globalization”.

Ms. Maki Imazu, Programme Officer at UNIDO ITPO Tokyo provides comments as a co-organizer of the networking fair: “The students are becoming more eager and the small and medium-sized enterprises (SMEs) are just as passionate in the efforts to attract the interns to their companies”. Ms. Imazu expressed that the learning experience is mutual on both the students and the companies’ sides and that there is much to look forward to as the programme evolves.