African Business Education Initiative for Youth is a program initiated by the Government of Japan in the effort to cultivate human resource to play the role of future lead in guiding through Japanese businesses into the African business market.

On February 20 (Monday), ABE Initiative Seminar was organized by the Japan International Cooperation Agency (JICA) with the support by UNIDO ITPO Tokyo. Dr. Hiroshi Kuniyoshi, the head of UNIDO ITPO Tokyo, made the opening remarks and an introduction to the organization. 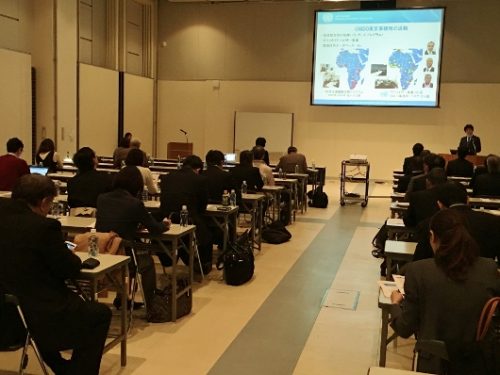 The initiative aims to accommodate 1,000 young men and women from Africa within the period of 5 years from the public sector, entrepreneurship, employee of private companies and teachers. As exchange students, these young professionals are to enroll in Master level courses, followed by internships with Japanese companies. The initiative aims for these students to obtain skills and understanding on the Japanese business culture. As ABE Initiative 2.0 has been announced during TICAD VI held last August, further expansion of similar programmes are expected.

The seminar was held to inform Japanese companies about the internship programme for the summer of 2017. Mr. Tomoki Kobayashi, Director, Planning and TICAD Process Division, Africa Department and Mr. Masato Kumagai, Deputy Director General, and Group Director for Higher Education and Social Security, Human Development Department of the Japan International Cooperation Agency (JICA) made the presentation on the framework of the programme and how Japanese companies could accommodate the students. They added that under the concept of “dynamic Africa”, much focus has been given on the potential capacity that Africa embraces, and that in 2017, 250 slots are expected for internships. (360 Japanese companies registered as of today). Much appeal was made to showcase that the framework for summer of 2017 is very much in place.

The presentation by Mr. Jun Ishiro, Director, International Students Division, International Students Affairs Department of the Japan International Cooperation Center (JICE), followed to further introduce the procedures and responses by the exchange students. As these students are young professionals with experience in their workplaces back home, it was stressed that Japanese companies could expect benefits by accommodating them for internships as it could lead to the marketing of the targeted country while in Japan and/or build networks in Africa through the interns. The internationalization of the companies was also introduced as an advantage in having the interns for the summer.

Mr. Ahmed Fekry Hassan Sakr from Egypt, attending Keio University (Media and Governance), is from the 2nd batch of the initiative, having arrived in Japan in 2015. He introduced his experiences as an intern at Hinode Sangyo in 2016, and expressed that his future wish is to send value-added products from Africa (not only raw materials) and also launch an eco-friendly tourism village; all of which came from the platform of his experiences in Japan.

To close, Ms. Ines Somyedrima Ouedraogo of DMM. Africa and Mr. Kokichi Dohi of Europe Solar Innovation who have accommodated interns presented the advantages they experienced by having them through the initiative, especially in establishing networks and obtaining information relevant to local customs.

More than 50 exchange students joined the networking part of the seminar to meet-and-greet with the participating Japanese companies; such networking which will be continued at the Africa Business Networking Fair 2017, to be held in March.

On 24 March (Fri.), one-on-one sessions between exchange students from Africa and Japanese businesses will be held. African countries of the represented regions will also set up booths for an opportunity to exchange information.