Global Roadshow was held in Tokyo on Wednesday, November 2, 2016. The event was jointly held by GMIS Secretariat and UNIDO, and supported by METI, the UAE Embassy in Tokyo & JCCME.

Manufacturing industry, which creates 500 million jobs throughout the world, is not an exception when it comes to the need to review its traditional business model, especially in a world where digitization accelerates daily, aiming for efficiency.

As the world faces a turning point, industry, together with the representatives of government organizations, academia and international organizations will be gathering at the Global Manufacturing & Industrialization Summit (GMIS), the world’s first ever cross-industry forum, to be held in Abu Dhabi in the spring of 2017, to be co-hosted by the UAE Ministry of Economy and the United Nations Industrial Development Organization (UNIDO).

Prior to the summit, GMIS Global Roadshows are held throughout 10 countries in an effort to disseminate information and generate inputs. The event in Tokyo was held on November 2 (Wed.). 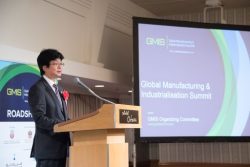 H.E. Eng. Ayman Al Makkawy, Director General, Industrial Development Bureau, Department of Economic Development, Abu Dhabi (DED), who traveled to Japan for the occasion, made an introductory speech followed by six other presenters and panelists from Japan and Abu Dhabi. 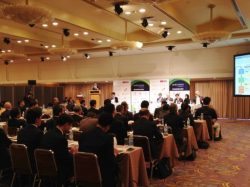 The panel discussion was moderated by Mr. Shigeharu Satake, Advisor, JCCME and Senior Consultant, Nomura Research Institute (NRI). A presentation on the current status of the manufacturing industry in Japan was provided by Dr. Shinji Tokumasu of METI. Efforts for further industrialization in Abu Dhabi was presented by Mr. Ahmed Mohammad Bin Ghannam of DED, and was followed by a presentation by Mr. Mitsuru Anezaki of JFE Steel, whose new business launched in Abu Dhabi on “Large Diameter Welded Steel Pipes” captured much attention of the audience. The fact that Japanese businesses hold only 2.8% (2015) of the total FDI into Abu Dhabi anticipates further growth of the Japanese presence.

Discussing on the subject, Mr. Yasushi Konno of Nomura Research Institute (NRI) emphasized the importance of maintaining strategy, while Mr. Ferda Gelegen of UNIDO ITPO Tokyo expressed that efforts shall be made in the global context, including developing countries, especially from the point of view of participation in global value chains. The event closed with much anticipation with comments by Ms. Mariam Al Kindi of the GMIS Secretariat, encouraging the participation of the Japanese private sector to the summit, next spring.