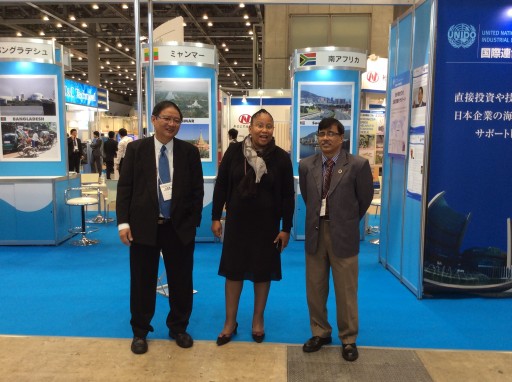 UNIDO ITPO Tokyo hosted three delegates in charge of water business and management from Bangladesh, Myanmar, and South Africa from 10 to 15 November 2014.

Delegates from three countries participated in Green Innovation Expo 2014 (GIE 2014) held at Tokyo Big Sight from 12 to 14 November. In addition to individual business meetings at UNIDO booth, the delegates were given opportunity to deliver presentation on each country in “Seminar on Water Business Management”. Detailed information on current water management system, policy on increasing water supply, as well as ongoing/planned water projects have attracted high attention from participants.

– Joined Ministry of Communication (Railway Department) as an engineer in 1983
– Moved to the Ministry of Public Administration in 2010
– Deputy Managing Director, Engineering of Chittagong Water Supply & Sewerage Authority since 2011

In April 2014 Ms. Makhene started a consulting company after working for the government of South Africa for 15 years. She served as an Economic Counsellor at the Embassy of South Africa in Tokyo from 2009 to 2014.