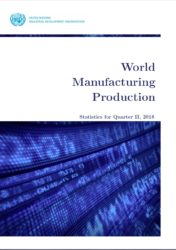 UNIDO Statistics presents this report on world manufacturing production in the second
quarter of 2018.