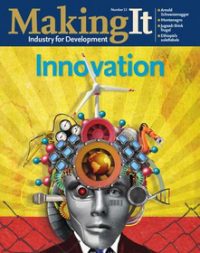 According to a leader published in The Economist in February 1999, “innovation has become the industrial religion of the late 20th century.” The leader continued, “Business sees it as the key to increasing profits and market share. Governments automatically reach for it when trying to fix the economy.” Since then, the relevance and importance of innovation has grown still further. Over the past two decades, it has become clear that it has a pivotal role in development. The build-up of innovation capacities has played, and continues to play, a central role in the growth dynamics of successful developing countries.