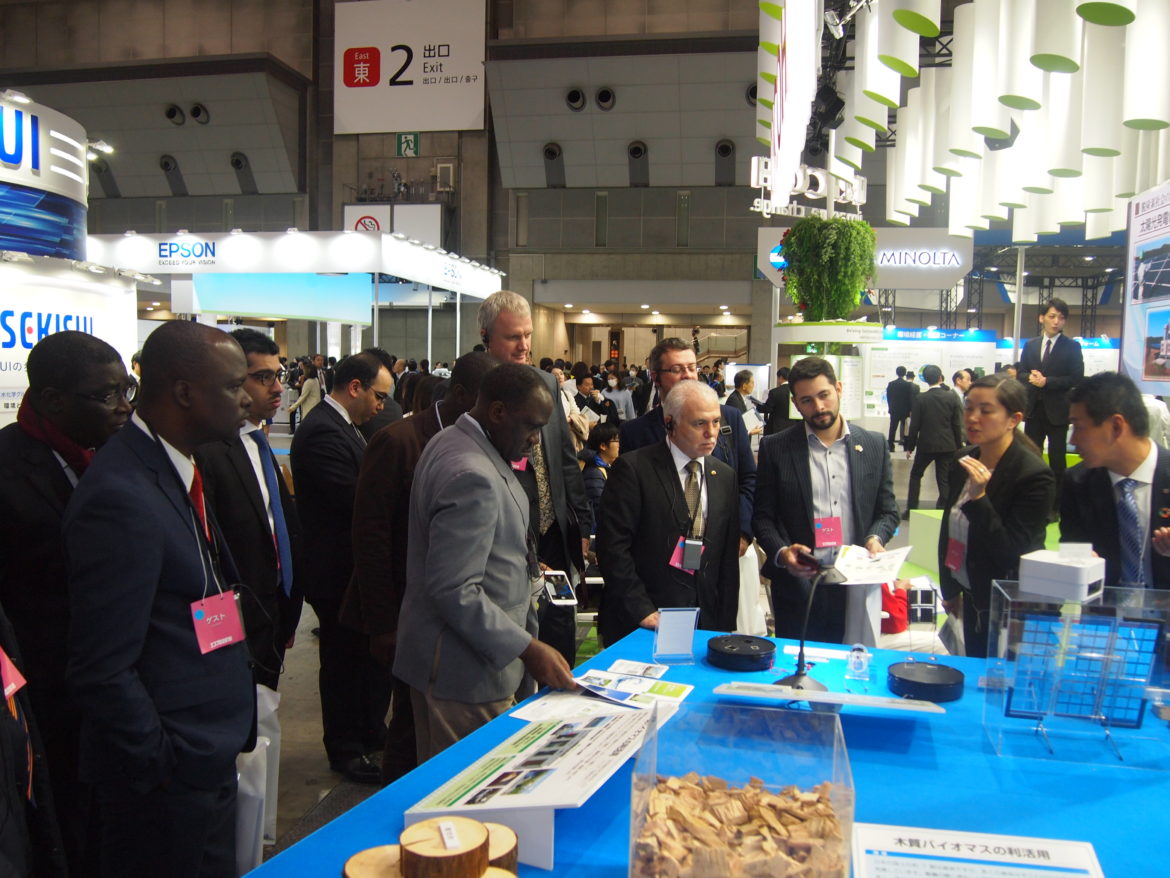 On 6-8 December 2018, “EcoPro 2018 -International Exhibition on Environment and Energy-” was held at the Tokyo Big Sight. With the 20th anniversary this year, the main theme of EcoPro 2018 was “Environment and Society of the SDGs Era, and to the Future” and the event attracted approximately 160,000 visitors for three days.

On the Day 2 of the exhibition (7 Dec), UNIDO ITPO Tokyo organized the guided tour for embassy representatives and 26 diplomats from 22 embassies in Tokyo took part. They visited 8 booths, which became a good opportunity to know about eco-friendly measures and technologies of leading Japanese companies.

Every booth was extremely busy with visitors from young students under their school’s extra-curriculum activities to business people having their negotiations. Meanwhile, the diplomatic delegation was separated into two groups with interpreters and made a tour to the company booths.

First, at the booth of Mazda Motor Corporation, their activities to mitigate the burden on the environment in the painting and production processes toward the achievement of SDGs were explained, then followed by the Ministry of the Environment which demonstrated the activities utilizing a new plant-derived material “Cellulose Nanofiber” and its technological development for the future. Nippon Steel & Sumitomo Metal introduced the concept “LCA (Life Cycle Management)” by describing the steel as an environmentally-friendly material, while Mitsubishi Electric showcased their advanced technologies and products utilized in a wide variety of places ranging from home to even outer space.

The participants listened to the explanations of the companies enthusiastically, took many pictures, and exchanged business cards at the booths that attracted the interest, which showed their high concerns about eco-friendly activities. At the Panasonic’s booth, the solar lantern technology introduced in several developing countries as part of its CSR activities and the diplomats asked specific questions about the ways of implementation and applicability in their home countries. There were many comments raised at the booth of Sekisui Chemical Co., Ltd. on the actual cost and usage of a new product “Dye-sensitized Solar Cell” that is considered to be solar cell of the future generation, whereas Ricoh Company, Ltd. that is aiming to contribute to the circular society explained their practices of reusing and recycling activities and presented their plastic recycling technology. Finally, at the end of the tour, the booth of Kao Corporation was visited and the participants learned the importance of environmental education including saving water and electricity, waste management, 3R and forest conservation.