VIENNA, 11 May 2020 – The United Nations Industrial Development Organization (UNIDO) and the Government of Japan have recently launched a new technical cooperation project in the Islamic Republic of Iran with the aim of enhancing the economic resilience of the fishery industry in Chabahar and improving the competitiveness of its locally produced fishery products.

Chabahar, part of the Sistan and Baluchistan province in the south of Iran, is one of the country’s least developed regions, offering very limited employment opportunities for its youth. The current social and economic situation in the country, which has been subject to economic sanctions for several years, is being further destabilized by illicit drug trafficking which has made inroads through the province’s borders with Afghanistan and Pakistan.

The project “Enhancing the economic resilience of Chabahar through strengthening the fishery industry” will contribute to the creation of income-generation and employment opportunities in Chabahar’s fishery sector by enhancing quality management and improving access to new markets for locally produced fishery products in collaboration with institutions and the private sector in Iran as well as in Japan. The Government of Japan has been supporting UNIDO projects in the region since 2016, and its extensive expertise and know-how in fishery value chain management will serve as a further value added to the project.

Japan’s Ambassador to Iran, His Excellency Mitsugu Saito, said, “The development of the Makran Coast, including Chabahar, is significant for the livelihood of the people in the region. Chabahar is the only Iranian port in the Indian Ocean and it is an important North-South corridor gateway for the Central Asian countries to access international waters. Taking this into account, the Government of Japan decided to support UNIDO in improving the fishery industry, one of the traditional industrial sectors in this area. I do hope that the existing potential of the region and the activities carried out by UNIDO in this project contribute to the enhancement of human resources capacity and increase the  competitiveness of fishery products and consequently generate higher income for the people in Chabahar.”

Fishermen, micro, small and medium-sized enterprises, and fishery support institutions will benefit from training in improved quality management, also aboard fishing vessels, and from the provision of advisory services on product diversification and identifying and accessing new export markets.Iran is one of the Middle Eastern countries worst affected by the coronavirus and, by fostering economic opportunities while in parallel enhancing social stability and resilience, the project will help the country recover. It will also further strengthen the humanitarian-development-peace nexus which is prioritized by the Government of Japan in its aid and development policy. 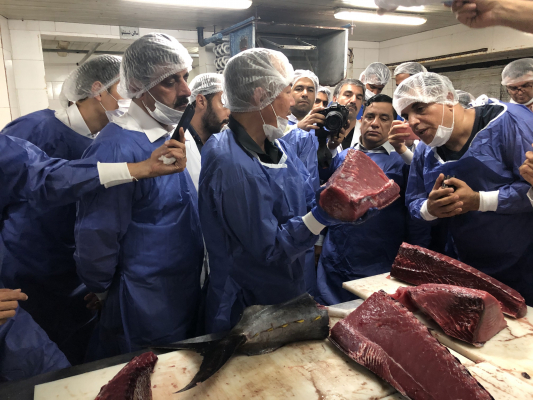