Y
ield Co., Ltd. has developed a multi-functional material “Titanystar” which decomposes harmful organic compounds by the photocatalytic technology, and it can be effectively applied to cleaning of undrinkable water into safe drinkable water. This photocatalytic reaction derives from a uniform layer of titanium dioxide (TiO2) generated upon metal titanium, by the special technology of surface oxidation. 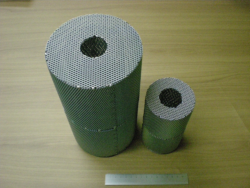 The photocatalytic mechanism was invented in Japan has been an excellent environmental purification method which decomposes and removes most of harmful substances simply by receiving ultraviolet rays. (See Fig. 2) As photocatalyst has been getting more excellent abilities to decompose and remove almost all harmful substances, disinfectant for water such as chlorine and ozone becomes unnecessary in water treatment process. Therefore, chemical-free and clean drinking water can be provided.
Fig. 1 Photocatalyst Titanystar 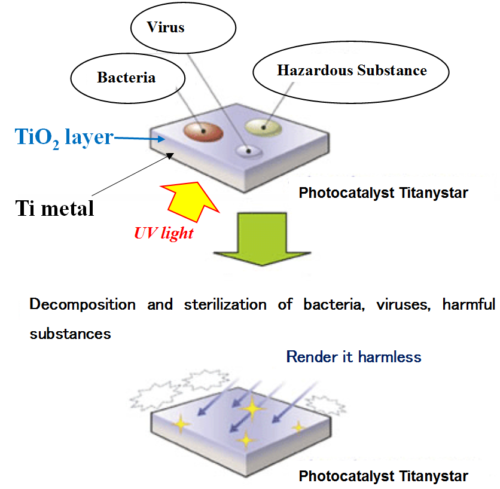 In addition, Photocatalyst Titanystar shows good performance for oxidative decomposition of organic components. Fig. 3 illustrates that more than 40% of organic compounds in wastewater are decomposed within 8hours. 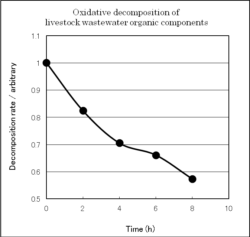 < Inadequacies of electric infrastructure in depopulated settlement >
When the photocatalyst receives ultraviolet light on its surface, it shows effects on contaminants such as bacteria and viruses. In developing countries, especially in depopulated settlements, water purification efficiency is somewhat inadequate due to lack of electric infrastructure. However, utilizing ultraviolet rays contained in solar rays which activate the photocatalytic function enables water purification without electricity supply and provision of drinking water.

< Infrastructure maintenance area and urban area >
In the infrastructure maintenance areas and urban areas, we manufacture water purification equipment with photocatalyst using ultraviolet lamp to purify contaminated water efficiently. Water purification equipment will consist of various types of UV source and other mechanical systems, which can be supplied from small-scale settlements in a densely populated areas without excess or deficiency.

In the occurrence of a natural disaster, it is possible to provide safe drinking water as a fresh water generator for disaster recovery.
Other than water purification, Titanystar can be applied for wide variety of purposes. (See Fig. 4) 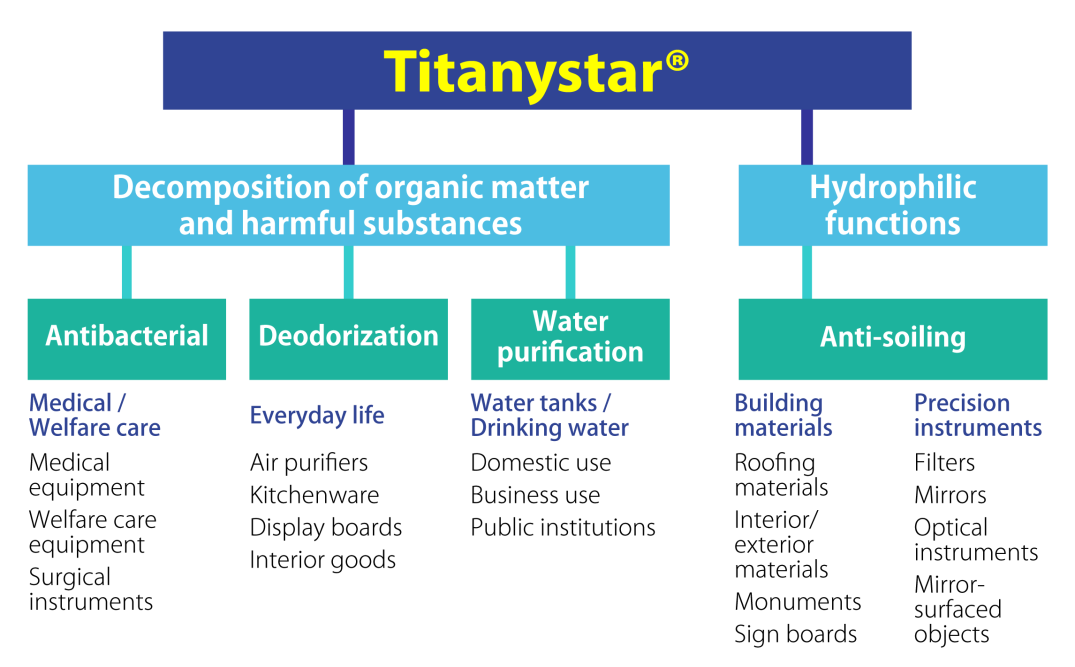 It is an environment purification technology with high reliability from Japan, and only Titanystar can purify wastewater among commercial photocatalytic products. We have a lot of experiences of installation both in domestic areas and overseas. Moreover, we received “the Best Innovator Award for the Security Water Project of the Defense Technology Symposium 2014” organized by the Ministry of Defense, on 12th November 2014.

As mentioned above, almost all harmful substances can be decomposed and removed. Since reaction takes place only by exposure to ultraviolet rays, large-scale electric power is unnecessary. Ultraviolet rays in sunlight can be available without power.
Since it is a catalyst, water purification reaction can be continued. It has stronger purification performance than chlorine, ozone and hydrogen peroxide. There is no complicated operation like separation membrane. Operating costs are almost unnecessary, only initial costs are needed.
TiO2 layer in Titanystar has higher durability against physical contact compared to standard TiO2 coatings, which can be gradually peeled from base materials due to degradation of adhesive properties. Moreover, even if TiO2 layer in Titanystar have a damage, it can be regenerated by the surface oxidation. (See Fig. 5) 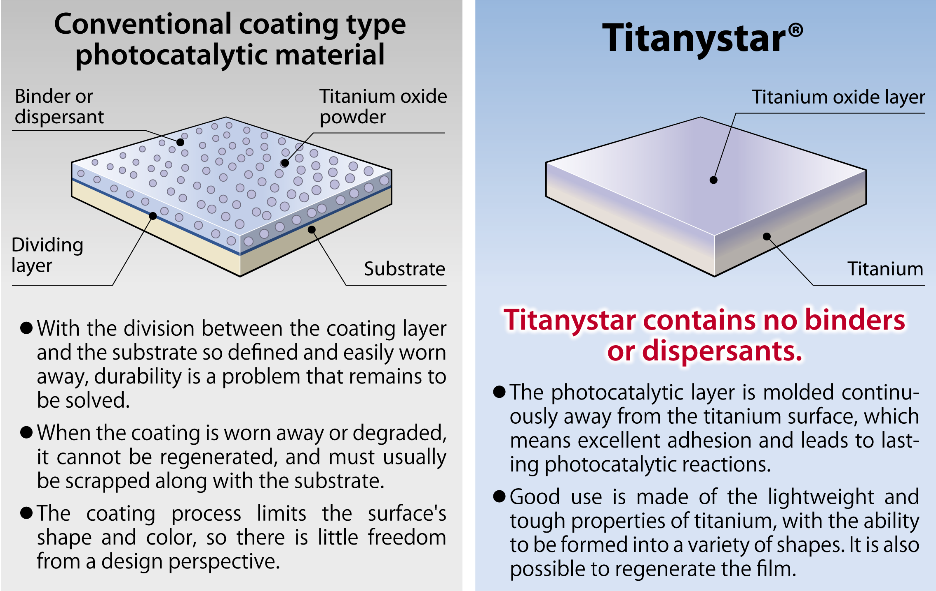 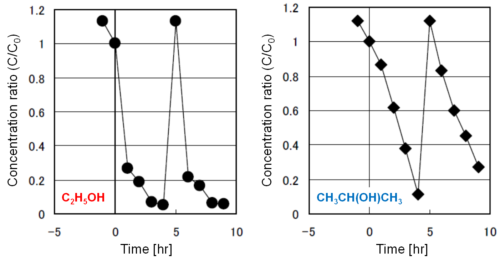 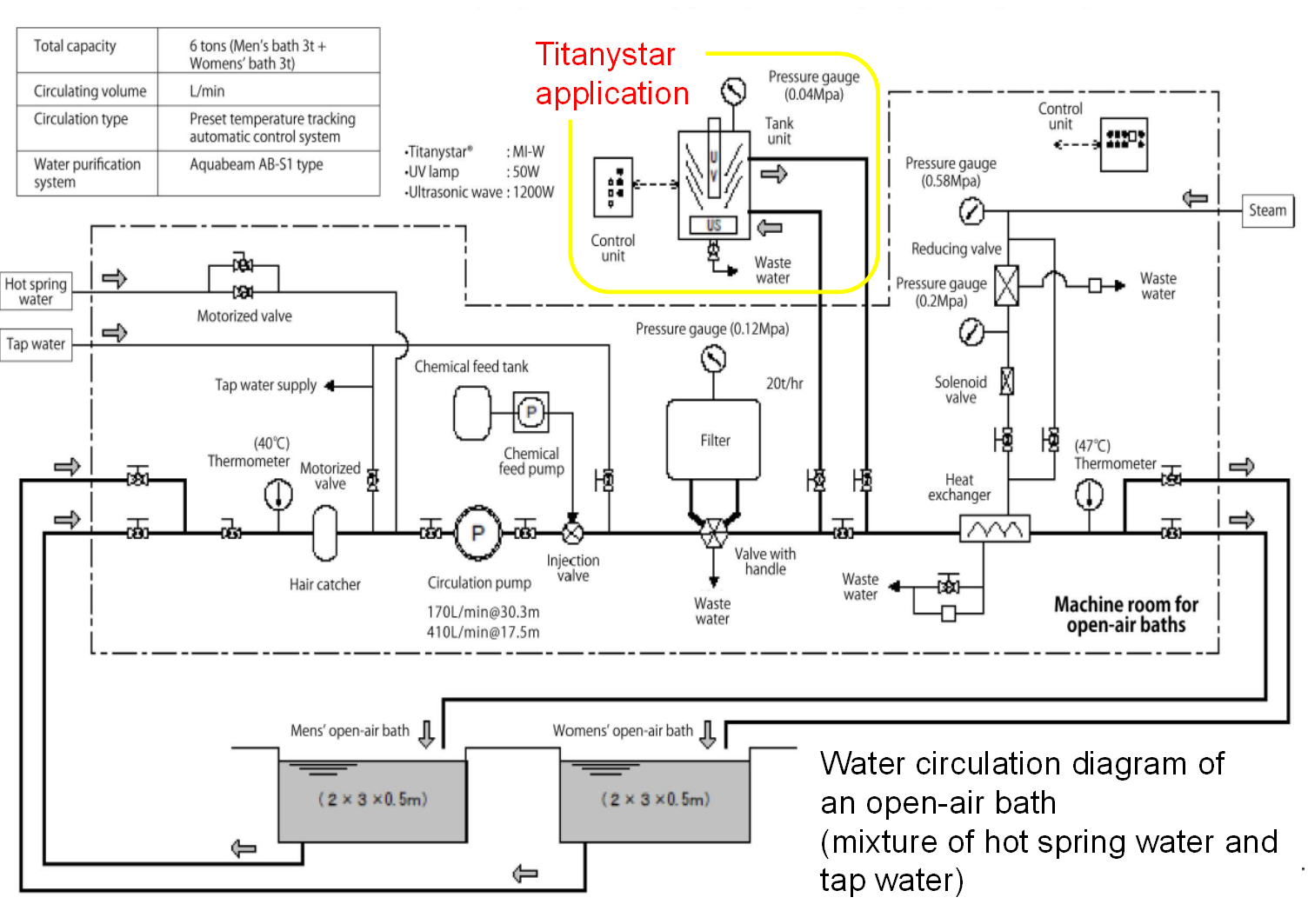 Fig. 7 The application exmaple of Titanystar (water treatement in an open-air bath)

Direct Investment
The last stage
Based on the results of the first and second stages, we want to invest directly in non-expanding countries and start up business based on our technology from the scratch.

Partnership
First stage
Initially we would like to contract our existing patented technology with existing local companies and start business operations.

Licensing of patent
Second stage
After partnership agreement, we would like to license according to circumstances, to locally producers and expand our business.