In a fermentation process, yeast is used to convert sugar into alcohol (ethanol). This process has been used in Japanese sake making for many centuries in Japan. Biomaterial in Tokyo Co., Ltd. (bits) has a lot of experience in the production of bio-ethanol using yeast. The company has proposed special strains of yeast to be used in the production of bio-ethanol that is safe to consume as a beverage additive or to use as an alternative fuel. 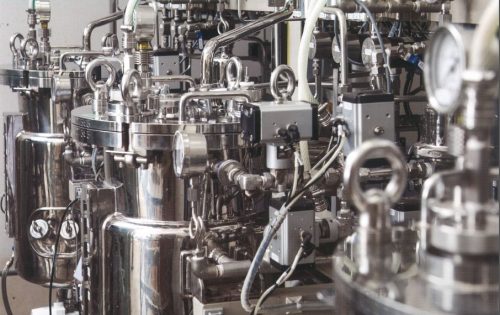 The final product, ethanol, has low levels of impurities. Therefore, distillation process is simplified whether the ethanol is used for human consumption or used for fuel. For example, a common impurity, methanol, has to be removed before being distributed as it is toxic to human. Fewer impurities also contribute to better fuel efficiency.

The special strains of yeast can tolerate up to about 38℃ while normal fermentation temperature is about 32℃. This heat resistance is particularly beneficial when fermentation tanks are located in the areas of high temperature because cooling of the tanks, which requires costly water and energy, is not necessary.

The proposed strains are genetically modified so that they can consume and ferment C5 sugars such as xylose and arabinose. For this reason, different types of C5 sugars such as cellulosic materials can be used for fermentation.

In addition to sugars, molasses from sugarcane and beets is also used for fermentation. However, molasses contains minerals and other organic matter. The exact composition of the minerals and organic matter depends on the soil environment where the sugarcane and beets are grown, but they are considered to inhibit the activity of yeast. The activity of the special strains is currently being investigated at Kyushu University.

After fermentation, its residues can also be converted to high-quality animal feed and organic fertilizers. The residues contain dead yeast cells that are highly nutritious. Making use of this residue can also help reduce the amount of waste material to be treated and removed from the facility.

Yeasts are used in fermentation process where sugars are converted into alcohol (ethanol). This is a common process used in Japanese sake making, and has been used for many centuries in Japan. The strains of yeast that “bits” is proposing have been certified as safe for use in Japan, and do not pose any health threats if consumed. The resulting ethanol safe, not only as an alternative fuel, but also as a beverage additive.

(Optional)
The fermentation residues can also be converted into high-quality animal feed or organic fertilizers. The residues contain dead yeast cells, which are highly nutritious, and making use of this residue will not only diversify the products of the facilities, but also help reduce the amount of waste material that must be treated and removed from the facility.

Our strains of yeasts have several advantages compared to wild-type strains.

1. Active in high sugar concentrations
The initial concentration of the solution containing molasses/sugars that are to be fermented are generally agreed to be about 16% by solids. This is partly due to the osmotic pressure that is applied on the yeasts at inoculation, which kills the majority of the cells. Our strains, however, are able to tolerate higher concentrations of sugars, up to approximately 30%. This means that larger volumes of sugars can be processed, either in a single or continuously fed batches.

2. Low levels of impurities
Regardless of how the final ethanol is used, low levels of impurities are desirable as it would simplify the distillation process, and allow the final ethanol to be used in a wider range of products. Methanol, for example, is a common impurity found in fermented alcohol and is toxic to humans. Extra measures would therefore be needed in place if the distilled ethanol is to be used as a beverage additive, and may not make the ethanol suitable for human consumption in certain situations. Fewer impurities would also be desirable for ethanol to be used as fuel, as it would burn cleaner and have better fuel efficiency.

3. Resistance to high temperatures
As mentioned earlier, our yeasts were able to ferment sugars into alcohol efficiently up to about 38°C. As the normal fermentation temperature is about 32°C, this is particularly beneficial if the production facilities are located in hot areas, as the fermentation tanks do not need a cooling mechanism. Cooling the tanks require water and energy, which are added costs and resources that can drive up production costs.

4. Ability to convert C5 sugars (xylose & arabinose)
The proposed strain has been genetically modified to allow the yeast to consume and ferment C5 sugars such as xylose and arabinose. Although these sugars are not commonly found in molasses (only C6 sugars), this ability will diversify the types of feedstock that can be used at the facility. This will also be beneficial in the future should the facility turn to diversify its feedstock to include cellulosic materials, which contain C5 sugars.

5. Uninhibited by impurities found in molasses
Other than sugars that can be converted into ethanol, molasses also contains minerals and other organic matter that cannot be utilized in the fermentation process. Although the exact composition varies depending on the soil environment where the sugarcane/beets are grown, it is hypothesized that the activity of yeasts are somehow inhibited by these extra compounds. As our yeast performs very well compared to other strains of yeasts, research is underway at Kyushu University to determine whether if any compounds do inhibit yeast activity, and whether or not our yeasts are unaffected by them.

Studies done at the University of Miyazaki have shown that our strains of yeast are superior to other strain of yeast when used in fermentation of molasses for alcohol production. Some advantages are as follows:

“bits” has a lot of experience using yeasts in the production of bio-ethanol. The latest project was the “Soft Cellulose Utilization Project”, which was funded by Japan’s Ministry of Agriculture, Forestry, and Fisheries (MAFF). The 4-year project involved converting cellulosic biomass (rice straws) into sugar solutions, and fermenting it to produce ethanol. The fermentation process used in this project is an adaptation of the conventional Japanese sake-making method that has been used for many centuries.

The tolerance of our yeasts to high temperatures (above the ideal fermentation temperature of 32°C) has been tested in collaboration with the Starch Technology Center at the Agency for the Assessment and Application of Technology (Badan Pengkajian dan Penerapan Teknologi, BPPT) in Indonesia. The tests were conducted by using molasses as the sugar source. The results showed that the yeasts were able to ferment about 80% of the sugars into alcohol efficiently up to about 38°C. The fermented ethanol contained low amounts of impurities such as methanol.

Contamination
Sterile and sanitary conditions are required for the yeast to propagate and to convert the sugar source into ethanol. As many other molds and microorganisms thrive on sugar, it is imperative that contamination must be reduced to ensure maximum ethanol yield.

Strains Mutation
As yeasts are rapidly growing microorganisms, there is a possibility that the superior characteristics could be lost during the continuous cultivation process. Freeze stocks of the strains are maintained at “bits”, and new supply of the yeasts can be provided as needed.

There are no patents related to the technology being proposed. There are, however, rights to using our special stains of yeasts that must be obtained.

Partnership
The company is looking for a bio-ethanol producer to form a partnership where it can provide its strains of yeast that can improve ethanol production. The company can also provide guidance on its cultivation techniques and any facility upgrades as needed. The selected strains of yeasts will also be continuously supplied as needed, subject to an annual contract.

Furthermore, “bits” will offer an optional plan where a separate line in the facility will convert the residue from fermentation process into high quality animal feed and/or fertilizer.

Licensing of patent
The company does not own any patents for the production methods of bio-ethanol, but there are restrictions to the rights to use its stain of yeast used in the production process. “bits” will agree to license the rights to the local partner on an annual basis as needed. The fees for the licensing shall be discussed up on signing of the agreement.