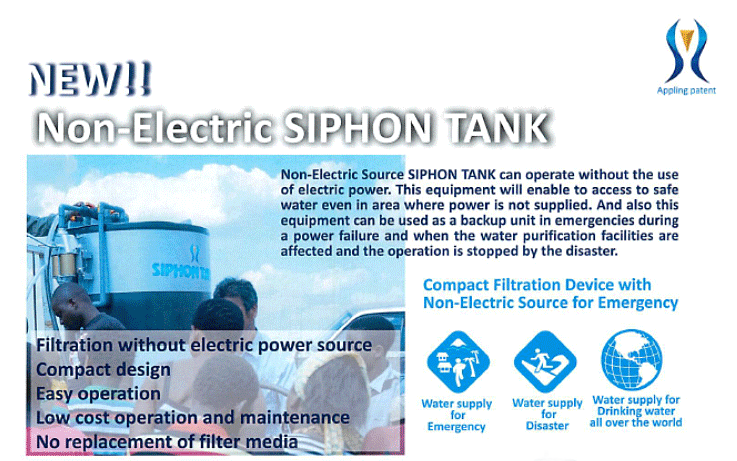 Produced by Nihon Genryo Co., Ltd, the Non-Electric SIPHON TANK (NEST) has the ability to consistently produce high-quality filtered water without the need to replace filter media. As such, this water could be utilized for drinking, industrial use and emergency situations. Through the company’s patented technology called “Siphon Washing Technology,” the creation of twin vertical and horizontal vortices is possible, prompting sand particles to be agitated in a three-dimensional washing activity. This is designed to remove the hard sludge layer on particle surfaces.

The best part is, NEST can operate without the use of electricity, making access to safe water possible -- even in areas where electricity is not possible.

NEST is utilized as a backup unit in emergencies such as natural disasters. For example, if a power failure occurs that compromises water purification facilities, the disaster ceases all operation. This does not have to happen with NEST.

In addition, NEST offers non-polluting and zero-emission equipment development due to the fact that no electrical resources are required in order for it to operate.

In the event this equipment needs to be used in emergency and disaster areas, the Non-Electric SIPHON TANK can easily be transported, with easy operation. Thus, it can be installed wherever clean water needs to be used, at any time. This makes it easy to use in areas struck by disaster, small villages with no potable water, and other similar situations.

Filter media can be used on a semi-permanent basis with no need for replacement thanks to Siphon Washing Technology. Disposal of filter media as industrial waste is no longer a concern, as a result. SIPHON TANK is "earth-friendly" filtration device that significantly contributes to a response to ISO14000.

IV. No fixation of filter media

With the use of NEST, there is no fixation and thus the filter media stays clean. When sewage water containing lots of organic matter is treated by conventional filter tanks, filter media can’t filter properly. With this equipment, this is no longer a concern. Media is therefore always kept clean thanks to Siphon Washing Technology, which washes for just one minute each day.

From compact design and easy operation to low cost of operation and maintenance, the Non-Electric SIPHON TANK (NEST) by Nihon Genryo Co., Ltd. carries many benefit in today’s society.

This is achieved by our patented technology, so-called ‘Siphon Washing Technology’. This technology creates twin vertical and horizontal vortices that cause sand particles to be kneaded each other in a three-dimensional washing action to remove hard sludge layer on the surface of particles.
In addition, NEST can operate without use of electricity. This equipment will enable to access to safe water even in areas where electricity is not supplied.

1. Movable for emergency and disaster areas
Non-Electric SIPHON TANK is easy to transport and is simple to operate. Since it is portable unit, it can be installed anywhere and anytime to provide clean water.

2. No need for filter media replacement
Filter media can be used semi-permanently without replacement, because of Siphon Washing Technology. Therefore, there is no need to dispose used filter media as industrial waste. SHIPON TANK is “earth-friendly” filtration device that significantly contributes to a response to ISO14000.

4. Prevention of fixation of filter media
When sewage and water with high content of organic matters are treated by the conventional filter tanks, filter media usually cannot filter and may stop functioning properly. However, MOBILE SIPHON TANK can prevent the fixation and keep media always in a clean condition by our Siphon Washing Technology (washing is conducted for only 1 minute in every single day.

NEST can be used as a backup unit in emergency (i.e. natural disaster) during a power failure when water purification facilities are damaged and the operation is stopped by the disaster.
Also, NEST has made a huge contribution to non-polluting and zero-emission equipment development, because it does not need any electrical resources to operate.

Nihon Genryo conducted a formulation survey to explore the possibility of sustainable drinking water supply in Niassa of the northern part of Mozambique in 2013. With Next, this project conducted hearing investigations in 3 provinces and also conducted pilot demonstrations in 4 places. Result of the demonstrations shows that NEST can significantly reduce turbidity of raw water. The quantitative results are as shown below;

The following materials have to be removed in advance, because surface water is preferable as raw water for the device, such as river, spring and lake water;

Partnership
We are looking for business partners which specializes in the field of water treatment and/or assembly.

Export of product
We would like to sell our products directly or through distributors.