CR- POWER is a specialist in process design and engineering for waste-to-energy (WTE). The company has developed C-POWER plant to address these concerns. Because waste management is one of the largest issues in the developing world, there becomes a need to effectively deal with odor, water pollution and infestations that occur as a result. This negatively affects the health of the population. A new technology by CR-POWER allows factories that produce combustible waste to generate electricity from waste and cut down on disposal. This technology is easy to use, and turns wastes such as biomass and plastics into gas. 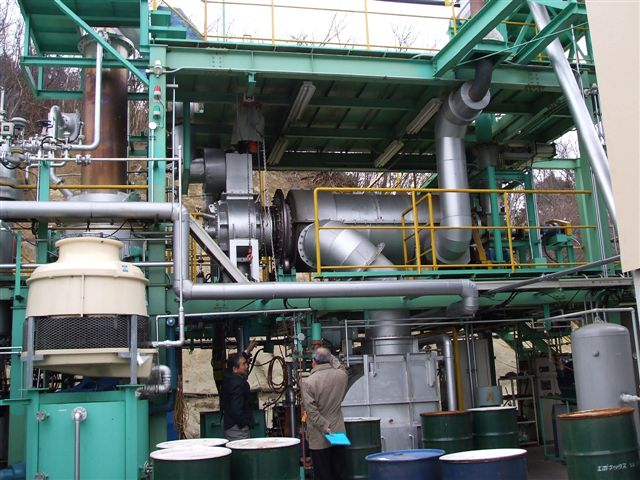 Ⅰ. Easy to Use
Thanks to its streamlined design and ability to be used in a variety of areas, C-POWER Plant is easy to set up, use and maintain. There is no need for professionals with special qualification. It works by thermally decomposing organic carbon such as MSW (Municipal solid waste) and biomass to generate the fuel gas, rotate the engine, and generate electricity.

Ⅱ. Thermal Decomposition Rather Than Incineration
This technology allows waste to be thermally decomposed rather than incinerated, which results in the generation of fuel gas with a high caloric value. In the past, the only option to get rid of waste was to bury it or incinerate it. With thermochemical decomposition and gasification, this is no longer necessary.

Ⅲ. Unique Rotary Design
Thanks to a one of a kind rotary design: horizontal rorating cylinder, twice as much fuel gas generation can take place, when compared with standard pyrolysis technologies. This design (U-turn kiln and Hybrid kiln) allows for more than 80% energy recovery ratio.

Ⅳ. Utilization for Power Generation
Small-scale plants can use this gas for power generation. In addition, the fuel gas and hydrogen can be utilized for batteries and chemical supplies.

Ⅴ. No Harmful By-Products
This technology does not produce harmful by-products like nitrogen oxide or dioxin. As a result, there is no treatment process needed.

NEXCO East Japan is the first user of commercial plant in the country to use this technology. The hope for the future is that this technology can be used instead of incineration in developing countries.

Advantages
1. It does not reject any type and form of raw organic matter.
It can treat organic matter(s) such as kitchen garbage, wooden paper and plastic waste individually and all kinds as well. Also there is no need to standardize the form of waste matters.

2. High calorie gas can be obtained.
As there is no entry of the air, the generated gas does not contain nitrogen and becomes high calorie gas.

3. Easy operation
As the equipment works on normal pressure, it is not subject to the high pressure gas regulation law.

4. Electricity generation by compact plant is available.
As the power generation by incineration treats high pressure gas and the steam turbine only provides with low power generation efficiency, the profitability is difficult to achieve unless the volume of waste reaches 100 ton and over per day.
In the meantime, as C-POWER has a structure which gains revolution by the engine worked by the same normal pressure gas as the gas for the car, it is easy to handle with high efficiency. For these reasons, the profitability can be attained by the volume of waste of 10 ton per day.

5. Environmental burden is small.
As it works on thermal chemical reaction in non-oxidized environment, it does not generate harmful substance such as DXN, NOx and SOx.

Our technology called C-POWER* thermally decomposes organic carbon such as MSW, biomass etc. generates the fuel gas, rotates the engine, and generates electricity. This technology has the following advantages over the current technologies:
a. MSW of five tons a day is enough to operate plants
b. The Dioxine treatment process is unnecessary
c. A special qualification person is unnecessary
d. Higher power generation efficiency around 40%

*One of our recent technologies named Hybrid kiln includes “spiral small cylinder” in horizontal rotating cylinder which enables pyrolisis and steam reforming at the same time.

Fluctuation of waste collection should be carefully monitored.

Practically commercialized equipment (Commercial plant)
This plant was developed as a demonstration plant for pyrolysis gasification using biomass by 3 companies, i.e. CR-POWER LLC (Formerly OSTRAND Corp), Tekken Corporation and East Nippon Expressway Company Limited (NEXCO).
Such plant was an electricity generation plant by pyrolysis gasification using wastes of unnecessary grass and trees collected after the cutting and pruning of these which grow on the roadside during the maintenance process for the express way and the plant was installed in the rest area at Nasu-kogen of south bound Tohoku Express Way.
In March of 2014, 3-year-demonstration experiment was finished. Then its practicability was proven as biomass power generation plant.
Since May of 2015, the necessary modification and additional construction was conducted in order to use as commercial plant and it was brought into pilot operation in November and in March of the 2016, it was delivered to the NEXCO. After that the plant was put into a continuous operation as the commercial plant and NEXCO has been conducting pyrolysis power generation using wastes of grass and trees collected during the maintenance process for the express way. Under such circumstance, C-POWER (horizontally rotating cylindrical power generation plant) is a first commercial plant.

Business of C-POWER LLC
C-POWER* is a gasification power generation plant by a heat chemical reaction.
*C-POWER is an acronym of C of Carbon and POWER of Pyrolysis of Organic Waste to Energy & Resources and a trademark for pyrolysis gasification plant by CR-POWER.
The pyrolysis gasification plant which CR-POWER LLC developed using horizontal rotary kiln (Name: C-POWER) has pyrolysis capability per capacity 5 times and more when compared with the pyrolysis gasification plant of conventional rotary kiln. Therefore, the compact type of such plant can prove its high performance.
Also C-POWER has superiority in the respect that it can obtain 3 times as much high calorie gas as calorific value and it works regardless of type of fuel and form when compared with other pyrolysis gasification plant such as vertical kiln, rotating hearth kiln.
As C-POWER has large output of power generation and by its simple structure, the maintenance is easy and it can provide with profitability even when the plant is compact.
The factories, offices and small municipalities who entrusted their waste treatment to some companies can be benefitted in (1) stopping the waste treatment cost, (2) the cost reduction for the electricity and fuel by introducing C-POWER.

3. The style of C-POWER is not fixed bed, not fluidized but rotating filled bed.
The movement of solid organic matter in the pyrolysis equipment is categorized. One is fixed bed where the matter moves from top to the bottom according to the gravity. In the rotary kiln, the matter moves down in a slanted way while being rotated, otherwise, fluidized bed which makes matter afloat by the force of current is used but C-POWER is different from all of these and it is rotating filled bed style.

Development of C-POWER by Hybrid kiln

<Horizontal rotary kiln which conducts pyrolysis and reform of tar and char simultaneously: C-Power S>
C-POWER was completed as a pyrolysis gasification power generation plant but the tar (liquidized hydrocarbon compound) and char (solid hydrocarbon compound) which occur by pyrolysis simultaneously with gas need to be extracted from the kiln to be separately treated in a form of fuel. The gasification efficiency is about 50%.

As twice as much energy can be obtained by single equipment, the profitability can be maintained even by the compact plant. In this way, the organic carbon which is left behind by the factory and offices can be utilized at such place as a source of electricity and heat. Also by the waste incineration power generation, the extensive collection of the waste and their transportation become unnecessary. And then, it accelerates the prevention of global warming. 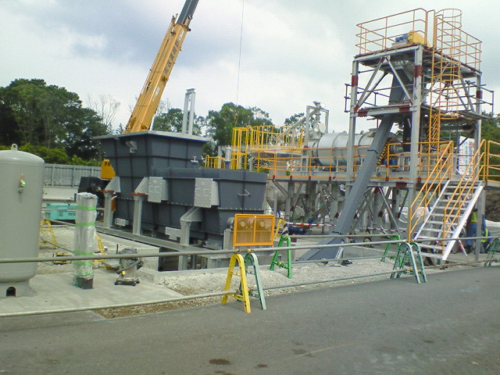 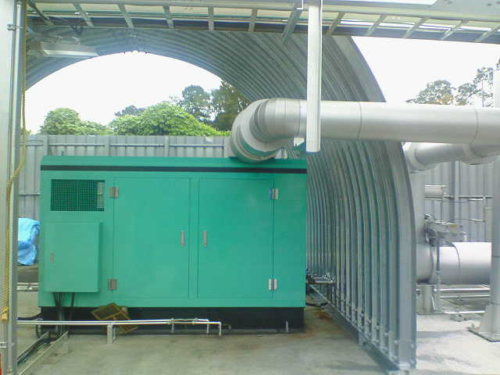 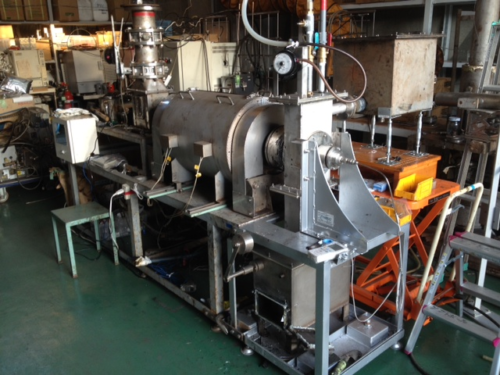 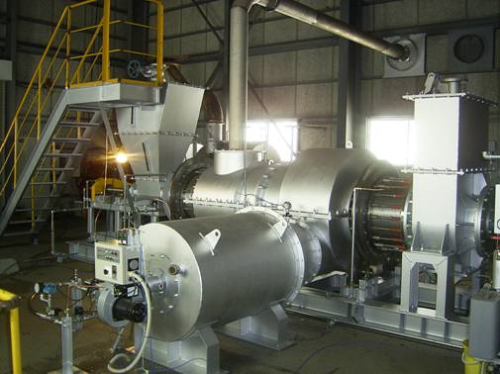 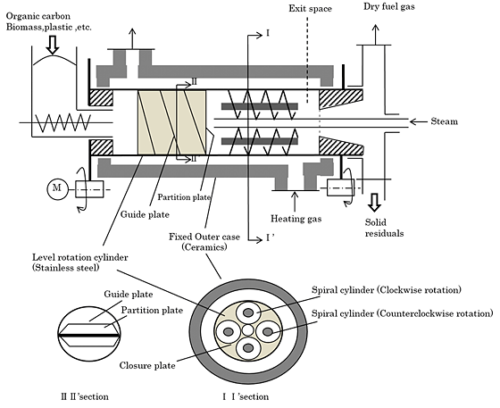 Typical operating results based on a pilot plant

1. Operation; Mixed plastics (Higher calorific value 9,519kcal/kg-dry base)
The components of mixed plastics used as feedstock and the typical operating results are shown in Tables 1 and 2 respectively. Operating conditions included a temperature of 700 degrees Celsius and feeding rate of 20 kg-plastics/h.

Element of Combustibles (Dry base)

2. Operation; Municipal solid waste
Dry MSW was heat resolved, and a combustible gas, the tar, and Char were obtained.