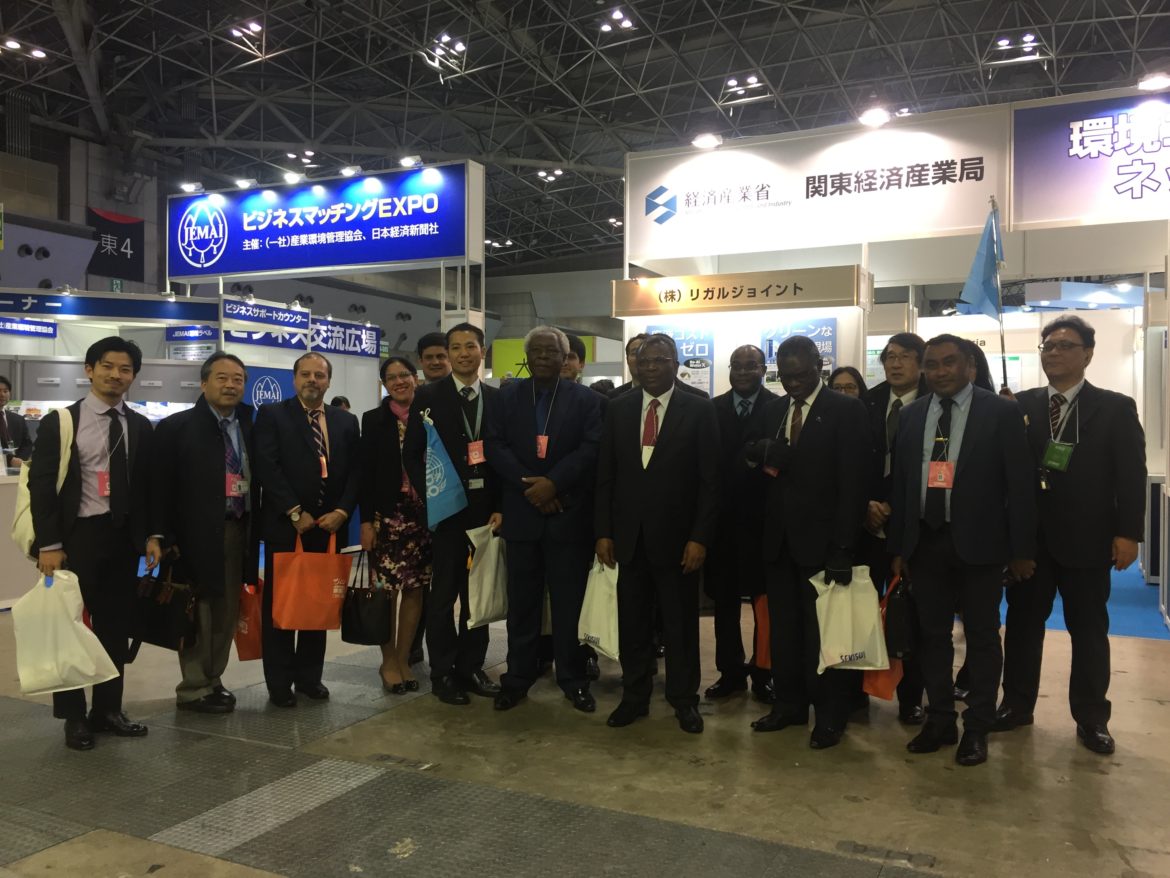 15 representatives from 12 Embassies in Tokyo visited “EcoPro 2017 -International Exhibition on Environment and Energy-”, a three-day event held at the Tokyo Big Sight on 7-9 December 2017. The event focused on environment and energy issues and the contributions to solving social issues. The embassy tour was organized by UNIDO ITPO Tokyo, with an aim to bridge the developing and emerging countries and the Japanese businesses.

The delegation plunged into the event space filled with children on school assignments and business persons to visit the first booth, Nippon Steel & Sumitomo Metal, where Mr. Hisayuki Hayashi from the Environmental Division, welcomed them. “Did you know that 1/3 of the planet earth is in fact steel?”, started off Mr. Hayashi. “Steel is full in its resource, cheap and very light. It can also be recycled perpetually, which means that it is environmentally friendly”. The final products by the company is mainly allocated for vehicle production and infrastructure, added Mr. Hayashi.

Ms. Ai Hasegawa of Corporate Environmental Sustainability Group was next to welcome the delegation at the booth of Mitsubishi Electric. “We have technologies to recycle home electronics”, explained Ms. Hasegawa. Among a variety of exhibited technologies, the 4th generation prototype of the refrigerator embarkation motorcycle targeted at small fishery villages in Indonesia captured the attention of the delegation the most. A member of the delegation commented that as technologies such as these are directly linked to food safety, he would be thrilled to see further spread of such innovative ideas across the world.

At the booth of Panasonic, Mr. Kensaku Ishibashi of the Environmental Planning Section introduced the concept of compatibility between “better life” and the sustainability by reducing the usage of energy while creating/activating more energy. The energy consumption 33 years ago in 1984 was exhibited in weights to compare it with that of today’s, which is much lighter, while the future in 33 years in 2050 was introduced through Panasonic’s technology for environment through saving, creating and preserving energy.

Kao, one of the largest chemical and cosmetic companies in Japan, also had its booth at the exhibition, which was busy mostly with the general public and children. “The nature of our products, which is essential goods used on a daily basis, calls for attention by the consumers and the future consumers, children, toward sustainability,” said Ms. Noriko Inoue from the Corporate Sustainability Department. “What is important is that ecological living becomes part of their lives effortlessly”, she added. The concept of “recycreation”, a coined term of “recycle” and “creation,” was introduced as a project that aims to contribute to sustainability. An example shown was reclaimed resin “blocks” made of recycled packages of soaps and shampoos, which was sent to the affected areas of natural disasters across the nation.

The booth of Ajinomoto, a food and chemical producer, was glowing in red with its new global logo. Dr. Fumio Ohta of CSR Group guided the delegation through the booth by introducing the sustainable procurement of raw materials, recycling and the 3Rs, sustainable water usage, and decreasing the usage of CO2 and food loss by half, all of which are the efforts carried out in line with the Sustainable Development Goals (SDGs).

Mr. Kazuhiko Sodeyama of Seiko Epson Corporation has seemingly impressed the delegation through the paper recycling process that requires no water, which is usually used in tons for the purpose. Also introduced was a printer that does not emit heat and the printer for home-usage that does not require cartridge but only an ink tank. “It seems that now is the right time for me to replace the 15-years-old printer at home”, said one of the diplomats and that idea pleased Mr. Sodeyama.

Dye-sensitized solar cell in a form of film generated with the indoor lights, resin products strengthening concrete structure and the metal pillars lasting infrastructure longer, and dual glass with intermediate film which allows projection onto a glass surface were all introduced passionately by Ms. Hitomi Miura of Environmental Management Group, Mr. Sho Tsujimura of Corporate R&D Center, Dr. Hirotsugu Yoshida of Urban Infrastructure & Environmental Products Company and Mr. Kim Jong Kyeong of intermediate film department at the Sekisui Chemical booth. The delegation was just as enthusiastic, asking questions and also touching the samples with thoughts towards relevance of the technologies in their home countries.

The last destination of the tour was the Business Matching EXPO booth, where 61 companies and organizations participated. “The companies across the nation, from Akita up north down to Okinawa in the south are here”, explained Mr. Takehisa Kabeya of Japan Environmental Management Association for Industry (JEMAI). Compact-sized desalination device designed for portability by Y’s Global Vision Inc., which is also listed in UNIDO ITPO Tokyo’s database, was also exhibited at this booth. The delegation asked specific questions on its characteristics and price.

“I have seen lots of interesting things, today”, said Mr. Bentley Namasasu, Deputy Head of Mission/Minister from the Embassy of the Republic of Malawi, as the tour came to an end. “There are many technologies that may be useful in my country especially in the rural regions. Importing the goods will eventually become too expensive so it would be better if the production can take place in my own country”. “I am impressed to know how the Japanese are willing to share the technologies they develop”, Mr. Namasasu smiled, expressing further anticipation in collaborating with Japanese businesses.