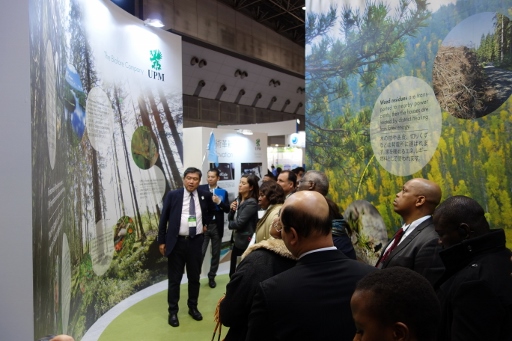 Diplomats from 25 Embassies toured the EcoPro 2016 Exhibition, where the latest eco-friendly technologies of Japanese manufacturers were displayed.

December 8 (Thur.) – 10 (Sat.): “EcoPro 2016 -International Exhibition on Environment and Energy” with a focus on two themes; “measures for the global warming and the environmental friendliness” and “clean energy and Smart Society”, took place at the Tokyo Big Sight. The event has been held for the past 18 years, this year renaming its title from “Eco Products”.

UNIDO ITPO Tokyo organized a tour to this event for a diplomatic delegation from developing countries in Tokyo. 20 diplomats from 25 embassies in Japan participated in the program.

The venue was full of eager businessmen and women and even children on school excursions. Adults were busy holding business negotiations while children were busy dashing from one booth to another, taking notes on the latest eco products exhibited. Every corner of the venue was filled with visitors as if it were a festival. In fact, it is an event that attracts nearly 170,000 people throughout the three-day exhibition.

The diplomats participating in the Embassy Program organized by UNIDO ITPO Tokyo began the tour in two groups, walking through the crowded venue with an interpretation service provided.. The groups visited eight booths of manufacturers displaying the latest eco products.

At the Panasonic booth, the delegation was introduced to the concept of “homes that not only consume but also produce energy”, where the system in which the energy generated throughout the night-time is being utilized. At Toray, a high-functional fiber material attracted the delegation, where one of the representatives mentioned the ample resource in Africa and that she would be interested in knowing whether there is a plan to build a plant overseas. The vibration reduction system applied on the world’s fastest elevator in Shanghai was introduced at the Mitsubishi Electric’s booth. Toyota was eager to present the variety of products aimed to develop a hydrogen society while introducing a gasoline-electric hybrid vehicle that would bridge the time gap until the world is ready for such a society. The battery in the form of film at the booth of Sekisui Chemical also caught the attention of the delegation. It was clear that participants ad antennas out for specific environment related issues and the technology solutions to go with them. While taking photos and listening to the voice of the interpreter in a rather noisy venue, the delegation also heard from Fuji Xerox on their endeavor of “printer sharing” idea for a sustainable society. UPM, a company based in Finland explained about their approach to forestry while Ajinomoto showcased its research projects on sustainable harvesting of tuna, which is one of their major products used for the food items they produce. The delegation was eager to exchange cards at the booths expressing much enthusiasm towards eco products in Japan.

“There are many ideas that could be implemented in our country. It is very interesting”, commented the representative of the Embassy of Liberia while Ambassador from Timor-Leste mentioned that the environmentally-friendly materials are of his interest. The representative of the Embassy of Zambia smiled with confidence when he says “there are already multiple Japanese companies, however, there is certainly space for more Japanese companies to come to my country”.