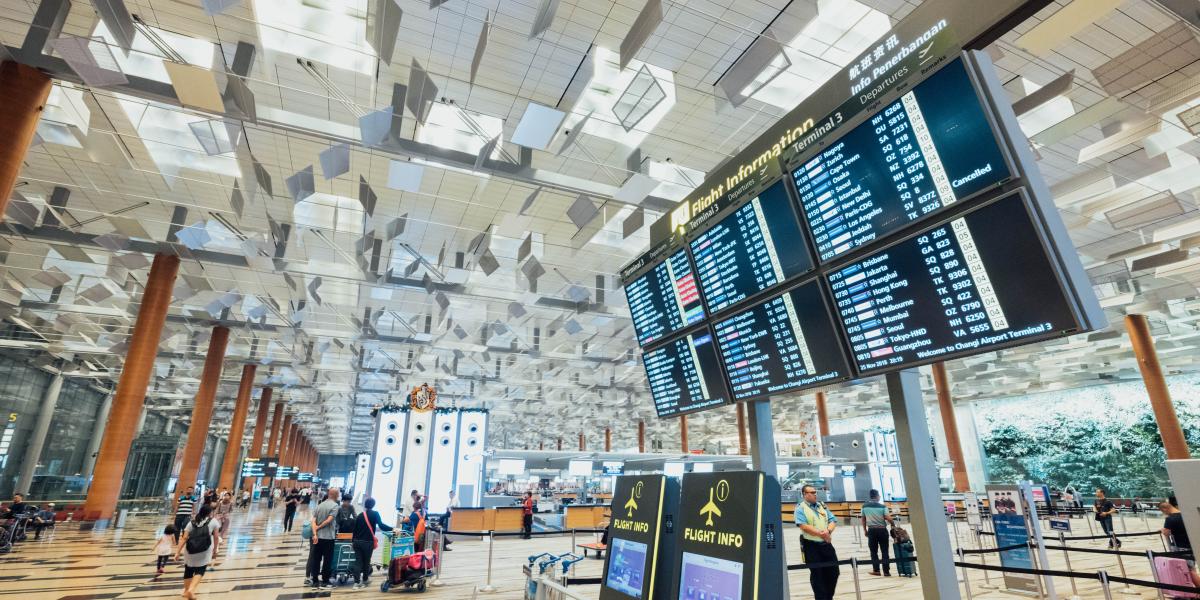 China’s post-COVID-19 recovery may hold clues to the future of global value chains.

Current global value chains are highly efficient, specialized and interconnected, but also highly vulnerable to global risks. The COVID-19 pandemic has been a stark demonstration of this point, causing supply-side disruptions in the first quarter of 2020, as China and other Asian economies were hit by the outbreak of the virus which eventually spread globally, leading to business closures around the world. The ensuing supply chain breakdown has prompted policymakers in many countries to address the need for economic self-sufficiency, along with strategies to better deal with global risks, even at the expense of the efficiency and productivity gains that globalization has brought. (*1)

Addressing this need for self-sufficiency—especially with regard to economic dependence on China—has given rise to geopolitical tensions, exemplified by the escalation in trade interventions in the lead-up to early December 2020(*2). Close to 1,800 new restrictive interventions were imposed in 2020 – over one and a half times the number in each of the two previous years, when the China-US trade dispute and a new wave of protectionism intensified. The adoption of discriminatory trade interventions outpaced liberalizations, despite the increase in new trade-liberalizing measures during this period and the lifting of some emergency trade restrictions. 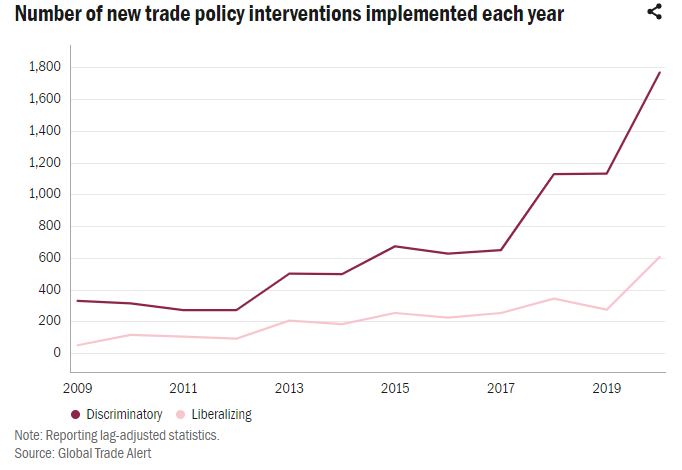 China registered the highest number of both trade-discriminatory and trade-liberalizing interventions of any country: almost 3,300 (43 per cent) of the 7,634 discriminatory trade interventions implemented between November 2008 and early December 2020, and 1,315 (48 per cent) of the 2,715 trade-liberalizing interventions over the same period applied to China. Amid rising US-China trade tensions in 2018-19, China already faced a particularly high increase in trade restrictions relative to other countries, which further intensified during the COVID-19 crisis. 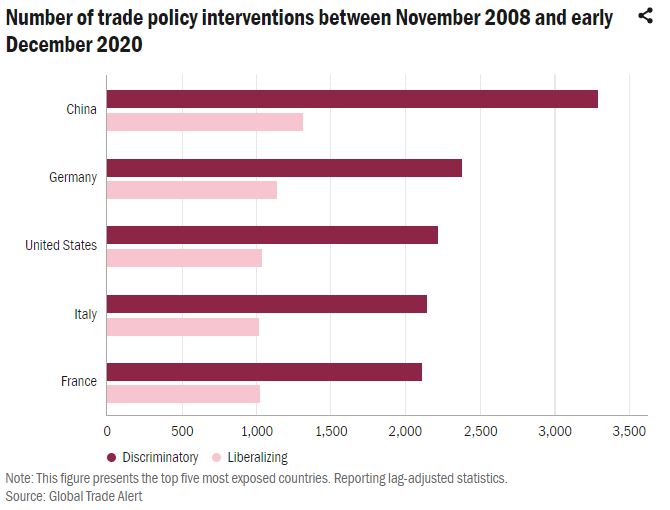 The supply chain disruptions of early 2020 were of a temporary nature, and extended GVCs have shown some resilience to trade and economic shocks.

COVID-19 supply chain disruptions provide an unprecedented opportunity to examine the resilience of GVCs. Data on trade flows and manufacturing output over the course of the pandemic suggest that the supply chain disruptions of early 2020 were of a temporary nature, and that extended GVCs currently interlinking many firms and economies seem to be resilient to trade and economic shocks at least to some extent.

The Container Throughput Index of the RWI – Leibniz Institute for Economic Research and the Institute of Shipping Economics and Logistics (ISL) (*3), for example, suggests that severe global trade disruptions first hit Chinese ports at the outbreak of the pandemic before spreading to other ports around the world. The RWI/ISL Index also shows, however, that Chinese ports recovered swiftly, bouncing back to pre-pandemic levels in March 2020 and strengthening still further following a slight setback in April and a marginal decrease in August. At the end of the year, the throughput of the Chinese ports declined again, but still moderately. The Index further suggests an upturn in container throughput for all other (non-Chinese) ports, although this recovery started later and has been weaker than China’s. 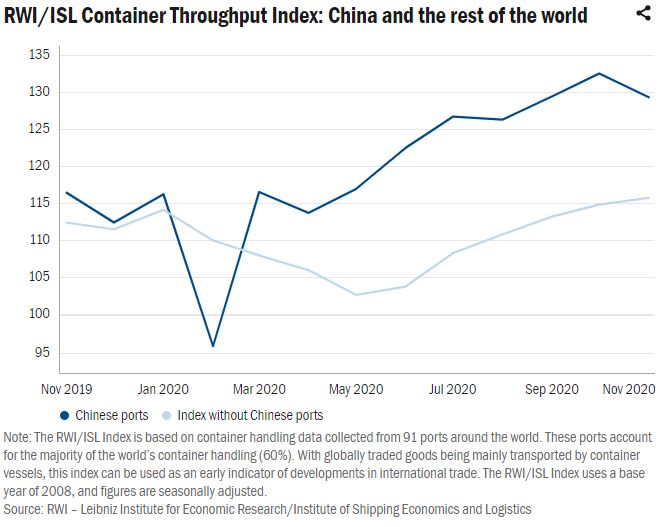 China’s manufacturing output had rebounded to pre-pandemic levels by June 2020, and has continued to rise. 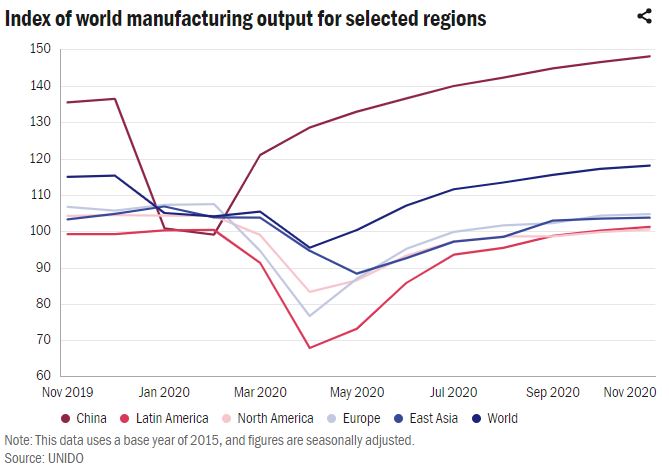 China’s strong economic recovery relative to other countries is even more starkly reflected at the industry level. The figure below shows year-over-year changes in output for November 2020 for five industries most relevant for China’s growth in industrial production, most of which are highly integrated in manufacturing GVCs. While output for these five industries increased significantly in China, the corresponding output in industrialized economies over the same period decreased in four out of five industries. Although manufacturing of computer, electronic and optical products in industrialized countries and across the world expanded in November 2020, their growth rates were still weaker than China’s. 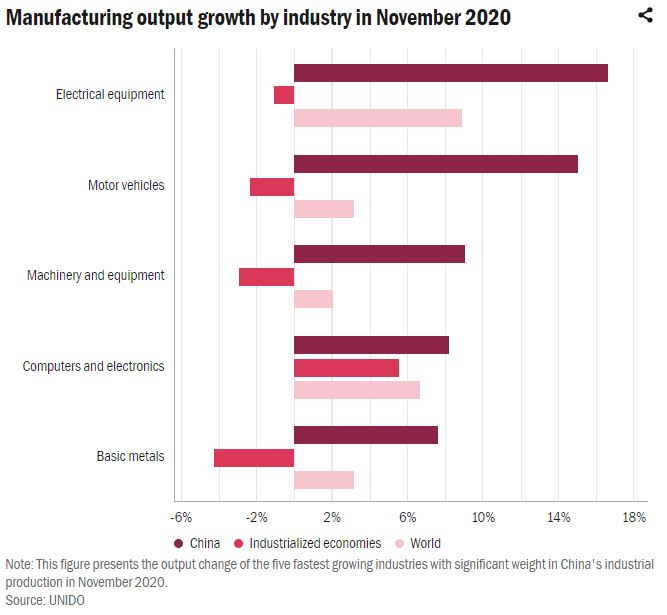 China’s swift and strong recovery seems to indicate that Chinese firms are more resilient to global shocks than most others. In fact, the value chains that Chinese firms are deeply involved in seem to be more resilient. One reason for this might be China’s success in quickly containing the local spread of COVID-19. Another reason could be that the country has more regionalized value chains compared to other countries. China has become a particularly attractive investment destination and trading partner for neighbouring economies over the years, especially the Association of Southeast Asian Nations (ASEAN). It has also focused on building international economic relationships within its own neighbourhood through, for example, the Belt and Road Initiative, and the negotiation and conclusion of the Regional Comprehensive Economic Partnership (RCEP).

China’s deeper economic integration with ASEAN countries is evident in its trade data. According to UNCTAD data, the ASEAN bloc has become China’s largest trading partner, surpassing both the US and the EU (*4).

Regional Comprehensive Economic Partnership The RCEP is a free trade agreement between China, all ten ASEAN member states and five other Asia-Pacific economies, including Japan, the Republic of Korea and Australia. Signed on 15 November 2020, the agreement covers about a third of world population and almost 30 per cent of global GDP.

ASEAN as an export target region had been of increasing importance leading up to the pandemic, with year-over-year growth exceeding 20 per cent towards the end of 2019. This growth rate was much higher than that of China’s exports to many other major world markets, including the US, Japan and the EU.

Although China’s exports to ASEAN were also impacted by the containment measures associated with COVID-19, decreasing by about five per cent right at the beginning of 2020, they were less severely affected than China’s exports to the US, Japan and the EU. When China’s manufacturing output began recovering from the crisis in March 2020, its exports to ASEAN increased again and grew by more than 5 per cent in March/April 2020, and by more than 10 per cent from July/August to November/December 2020. 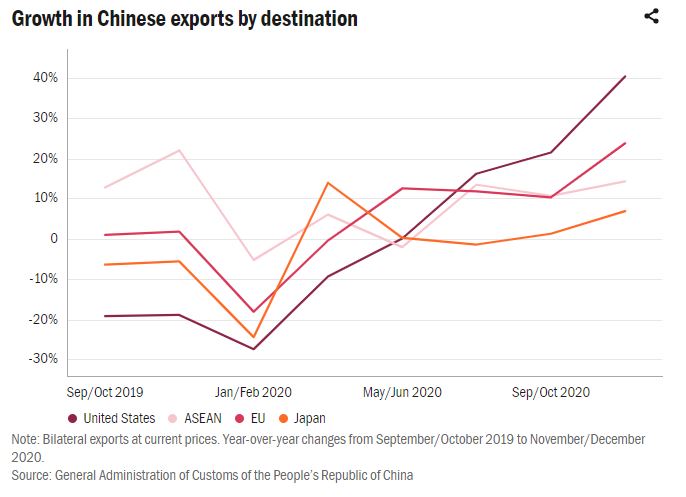 China’s increasingly regional focus will have implications for its traditional trading partners.

This apparent regionalization trend in China’s trade structure is expected to have implications for how GVCs might be recalibrated, with ripple effects for China’s traditional trading partners.

If highly specialized and interconnected GVCs become more spatially dispersed and regionalized, transport costs as well as vulnerabilities to global risks and supply chain disruptions may decrease. But strongly regionalized value chains may prevent firms and economies from efficiently allocating their scarce resources, from increasing their productivity or realizing higher potentials from specialization. Moreover, greater reliance on a more limited geographical area may reduce manufacturing firms’ flexibility, limiting their ability to find alternative sources and markets when hit by country- or region-specific shocks.

Changes in US imports from China can serve as an illustration of this point. Due to US-China trade tensions, US imports from China had been declining up until the first months of 2020. Yet reducing their reliance on China in favour of more regionalized value chains did not shield US firms from the economic shock the pandemic triggered. In fact, March/April 2020 saw a surge in US imports–in particular of medical supplies–from China, as the country scrambled to meet domestic demand (*5). This trend gained force as by November/December 2020 exports to the US grew at an extraordinary rate of over 40 per cent compared to same period in 2019.

Globalization at the crossroads

In spite of GVCs showing some degree of resilience in the face of the current global economic shock, the temporary (yet extensive) supply disruptions have induced many countries to reconsider the potential benefits of regionalizing or even localizing their value chains. These recent developments, together with the increasing power of emerging economies relative to advanced economies in trade issues and negotiations, make it difficult to predict how future GVCs can best be recalibrated, restructured and reorganized. Even though the roll-out of effective vaccines in 2021 may loosen the grip of COVID-19 on the global economy, ongoing protectionist and geopolitical trends suggest that the world is unlikely to see a return to business as usual. There is still a long and challenging way ahead.

We thank Muriel Rotermund for her research support, as well as Aiden Selsick and Niki Rodousakis for their editorial guidance.

Note: This article was updated with new data early February 2021.