The impact of COVID-19 on manufacturing investments

The impact of COVID-19 on manufacturing investments 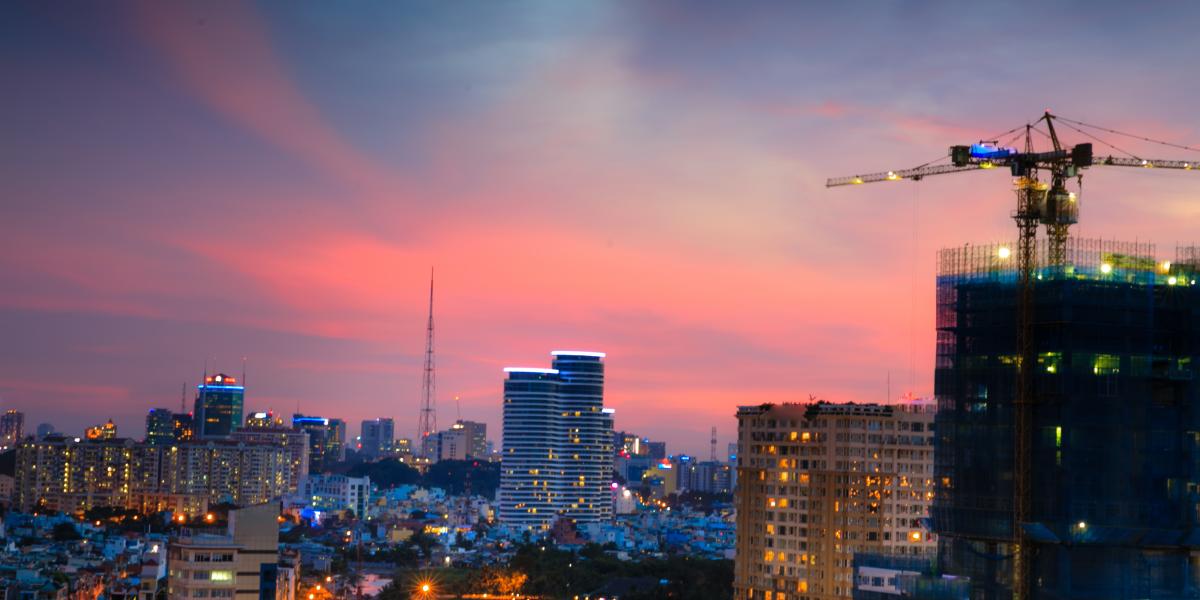 The impact of COVID-19 on manufacturing investments
Advances in production technology and a trend towards shorter supply chains make a return to “business as usual” highly unlikely.

The impact of the pandemic on both global trade and foreign direct investment (FDI) has been dramatic. Even now, as some countries begin easing their restrictions to breathe life back into their flailing economies, the full effects of this virus are yet to be fully understood. Certainly, this pandemic has accelerated many trends that have been emerging over the past decade such as the implementation of a “China plus-one (+1)” strategy(*1), increasing automation and regionalism.

The current model of globalization, particularly global supply chains, seems to be under threat of a radical reconfiguration. While many projects are still going ahead, numerous others have been put on hold. Depending on the duration and severity of the crisis, a significant number of manufacturing projects may even be cancelled completely as companies struggle economically in the short term and seek to re-structure their operations in the long term.

Traditional manufacturing companies, which in the previous months were busy shoring up liquidity to ensure their very survival, are now – in a second step – seriously questioning existing supply chain models. Planned production plants in low-labour cost countries (efficiency-seeking FDI) are stalling and supply chains are being re-structured in order to de-risk and shorten them. By the end of this process inter- and intra-company value chains might look significantly different. FDI project numbers show that this process has started already.

The current model of globalization, particularly global supply chains, seems to be under threat of a radical reconfiguration. 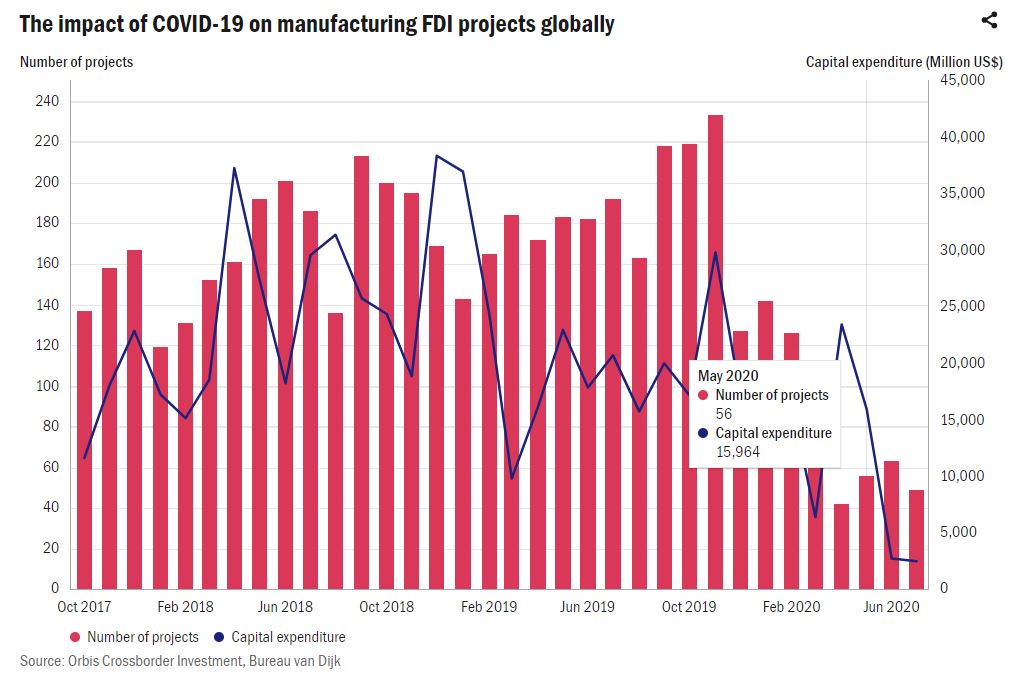 It is probably fair to say that even prior to this COVID-19 outbreak, globalization was creaking. An increasingly acrimonious trade war between the two main economic superpowers, Brexit, rising levels of geo-political risk as well as protectionist measures being put in place such as blocking FDI or M&A deals for “national security reasons”, rising numbers of non-tariff barriers (NTBs) or the weaponization of trade policy. But also, security related problems such as cybersecurity, terrorist threats and IP theft, as well as a rising societal resistance to the neo-liberal model in the form of anti-globalization movements and climate protests. In this sense, COVID-19 was merely the impetus for corporate managers to seriously contemplate a paradigm shift in the model of global value chains.

But it is the convergence of three major trends – market access, talent and technology – which make, for the first time, such a paradigm shift not only possible but even likely.

So, what does the future hold?

Advances in production technology and changing market dynamics, are increasingly offering a wider field of options for manufacturers today.

Unlike previous disruptions to supply chains, such as following the Fukushima disaster or the floods in Thailand, it is highly unlikely that we will see a return to “business as usual”. While up until now manufacturers simply had to return to their existing business model as quickly as possible owing to a lack of realistic alternatives, advances in production technology and changing market dynamics, are increasingly offering a wider field of options today.

During the 1990s and into the 2000s, corporate investment decisions were often driven by two considerations. Finding low-labour-cost destinations and ensuring economies of scale via large production sites that could supply entire regions or even their global market. With the significant labour-cost increases, especially in the coastal regions of China and, to a lesser extent, in many other East Asian countries, and an increasingly widespread use of smart manufacturing techniques, this cost competitiveness is eroding. 3D printing, automation and the “Industrial Internet of Things (IIoT)”, not only allow for “Lot size 1” type production, which not only makes the logic of old economies of scale obsolete, but increasingly also challenges location decision parameters. This does not mean that China or ASEAN nations won’t see Western FDI-manufacturing inflows anymore. It might however result in FDI inflows being primarily driven by a market-seeking logic, favouring China, India or ASEAN countries, based on their vast consumer markets rather than their pools of low-cost labour-force, and will hence unlikely reach pre-crisis levels any time soon.

The new equation for companies weighing up location decisions will therefore be determined by finding a local optimum of capital expenditure (for building new regional plants), the operating expenditure of producing closer to their target markets, the need for more resilient supply chains (to avoid production stoppages or side-stepping trade wars), as well as flexibility and speed to market.

It is likely that we will see a more regionalized or continental rather than global economy.

This latter point will translate for companies into lower working capital, less obsolescence, due to short supply chains and goods in stock when fashions change, and better catering to customer demands. It is therefore likely that we will see a more regionalized or continental rather than global economy. Such re-awakened regionalism will probably also breathe new life into trading blocs such as the European Union, ASEAN or USMCA and result in a systemic and continuous low-level drive for re-shoring, or at least near-shoring initiatives. Countries will therefore need to reassess their value proposition not only through the lens of their incentive offering, but in particular, in terms of their potential position within this context.

USMCA , short for United States-Mexico-Canada Agreement, is a free trade agreement that came into force on 1 July 2020 and serves as the successor to NAFTA (North American Free Trade Agreement).

The new era of advanced or smart manufacturing, based on the above mentioned convergence of automation, robotics, and Big Data analytics generated from the Industrial Internet of Things (IIoT), will result in a significant demand for highly skilled labour (talent), along two dimensions: the number of skilled workers, and the level of skills. Nations setting the educational parameters right now in this regard will go a long way to ensuring future prosperity; missing it almost invariably ensures a long-term systemic disadvantage in the global competition for inward investment.

Admittedly, this creates a super-storm for emerging markets who will no longer be able to sell themselves simply as “low-cost” locations, as companies will increasingly substitute low-skilled jobs for investment in capital. However, the process of unwinding and re-shaping supply chains is a complex one and will take many years. Therefore, a long-term strategy is required for those looking to attract this investment. There will also be a great deal of debate within boardrooms, as companies will be seeking to limit investment costs as well as the operational headaches such disruption invariably brings.

Companies, therefore, will be asking themselves: What do I need to do in house and what can I source externally? Are the right suppliers close by? Is the infrastructure in the locations I am looking at available (not only roads and airports but increasingly optic fibre and research institutes of applied science)? Are the skill-sets available? In short, is there an ecosystem that supports my business? Especially this latter point will become a key determinant. While traditional manufacturing looked for fork-lift truck rental and machine building capabilities in close proximity, smart manufacturing will start to look for data scientists, electronics specialists and the like.

It will not be the revolution many of the more alarmist newspaper headlines seem to suggest; instead these changes will emerge as an ongoing, quickening over time, evolution of FDI stock. The more immediate effect will however be felt in future FDI flows. Companies will not dismantle sites geared towards economies of scale; rather new investments or replacement investments will follow the new supply chain paradigm.

Who will be the winners and losers?

Those who stand to lose the most would be emerging market countries without a highly capable investment promotion agency (IPA) and without an updated strategy and value proposition.

As noted above, we can expect to see a movement away from the traditional model of “cost efficiency” (low-cost locations) and instead an increase in ”market” focus (Asia for Asia, Europe for Europe, Americas for Americas). In this context, we expect to see a marked increase in regionalism and near-shoring of projects. Countries offering lower labour costs – for instance at the fringes of the European Union – may become more attractive for lower-skilled manufacturing projects, relative to East Asian locations. Such countries will, however, need to make sure to always complement their offering of a large pool of labour with a sufficient number of highly skilled people to coordinate and run advanced manufacturing sites, allowing for the gradual up-grading of production facilities with automation and smart factories. Cutting-edge investments will be located in tech ecosystems that offer the full range of support services and world-class infrastructure such as Cyber Valley.

Free trade agreements (FTAs) with large trading blocs, close geographic proximity and developed infrastructure, will become increasingly more important as decision-making factors for manufacturing FDI in the periphery of core markets, as this allows corporate managers to side-step long supply chains, red-tape, trade barriers and NTBs and may even benefit their operational cost position. This also hedges against difficulties in specific regions. Balancing the disadvantage of an increased capital expenditure is a built-in geographic redundancy, that reduces the risk of global production stoppages on account of multiple supply options.

Those who stand to lose the most would be emerging market countries without a highly capable investment promotion agency (IPA) and without an updated strategy and value proposition. Merely handing out multi-coloured brochures and boasting a “low-cost” environment will no longer be sufficient. Work will need to be done to develop a robust understanding and knowledge of the local business eco-system and to ensure the government is investing in the required physical and technological infrastructure and education.

The need to up-skill, think strategically and invest in the appropriate infrastructure such as technology parks will be crucial for emerging markets if they are to benefit from this “new” globalization.

COVID-19 might have been the impetus for a fundamental re-shaping of the global economy, but it certainly isn’t the sole reason for the paradigm shift we are witnessing right now. Enabling production technologies, political and societal conditions and economic fundamentals have long been in the making. The most striking changes will be that big regional blocs will become more dominant, and that logistics costs, supply chain resilience and carbon footprint will play a bigger role. The question might only be if all countries are equally well prepared for this paradigm shift.

This is a potential game-changer for emerging markets, the need to up-skill, think strategically and invest in the appropriate infrastructure such as technology parks will be crucial if they are to benefit from this “new” globalization. Simply relying on a “low-cost” environment value proposition will no longer be enough. Whilst governments continue to run large deficits, money needs to be set aside to invest in their local business ecosystem.

As for the companies themselves, being resilient and able to respond quickly to future disruptions, whatever form they may take, will be key to their long-term success.

References
1. Owing to the rapid wage-cost increases in China, as well as the overall slowing of China’s growth trajectory, many companies are adopting a “China plus-one (+1)” strategy; adding production plants or subsidiaries in Southeast Asia. Here in particular Vietnam, but also Malaysia, Thailand, Indonesia, and the Philippines continue to attract foreign investment projects.